On Saturday 19 October, I attended the morning of the first conference of the Greene’s Institute, ‘Found in Translation’ (full programme). As the call for papers stated, scholars working in any field of the humanities are often very aware of ‘translation loss’: the precise meaning of important ideas and concepts shifts when translating them from one language into another and the literary language of the original cannot be fully grasped when reading a translation of a text. ‘I am frustrated that my students are not able read important texts in the original language any more’, said one of the conference participants. However, only thinking about translation in negative terms, using words as ‘loss’ or ‘compromise’ is too limiting. The aim of the ‘Found in Translation’ conference was, therefore, to take another, more positive angle and ask what is actually found in translation. In the remainder of this blog, I will briefly describe some recurring themes discussed during the morning of the conference.

A number of participants discussed the orality of medieval narratives and what happens when elements from this oral tradition are transmitted, or rather ‘translated’, to a written tradition. ‘The enclosing of the saga within codicological boundaries’, Brian McMahon named it in his paper. Julie Dresvina pointed to the fact that some stories from an oral culture ‘slip through the cracks’ such as in The Book of Margery Kempe, a text in which Margery Kempe is a ‘compulsive storyteller’. Godelinde Perk’s discussion of Modern Devout Sister Books from the Low Countries, which contain biographies of exemplary members of religious communities, revealed similar elements of orality. In addition to this, Godelinde stressed that her paper, which focussed on Middle Dutch texts for an English-speaking audience was, of course, already an act of translation – and therefore interpretation – in itself. Ilya Sverdlov also pointed to this in his paper on the complex practice of translating Icelandic compound (place) names into English.

Another interesting aspect discussed during the conference was how the present can inform an understanding of the (medieval) past. Julie Dresvina explained how modern day memes helped her to grasp both the centrality and the marginality of medieval misericords (small wooden images on the underside of a folding seat in a church). Sander Vloebergs used modern dance to establish a connection between modern and medieval bodies, transmitting the female saint’s life of Lutgardis of Aywières to contemporary dance: https://artistictheologylab.com/portfolio/videos/.

The morning ended with professor Henrike Lähnemann’s interactive keynote lecture on the impact of Luther’s Bible translation (watch the first part of the keynote on youtube and follow the exercises on the handout). When we were asked to write our ideas about Bible translation on post-it notes, they varied widely, ranging from ‘translating the Bible is impossible’ to ‘we should translate the Bible in as many ways as possible’. According to Luther, translation was a process of ‘letting go of the letters’ (the title quote of the keynote lecture, taken from the Sendbrief vom Dolmetschen, fol. b2r) and focussing on a translation that would make sense to a contemporary audience. During her final reflections, Professor Lähnemann stressed that ‘translation is political’. What is found in translation is a world that is more open and more connected. Translations allow for more dialogue and understanding across language boundaries, across space and time, and even across different media.

Thank you to the Greene’s Institute for organizing this wonderful conference.

Diana Denissen is a Swiss National Science Foundation post-doc mobility fellow. She works on late medieval religious literature and women’s writing from England and the Low Countries. Her monograph Middle English Devotional Compilations will be out in November of this year. You can follow Diana on twitter under @folioscribbles or on her website. 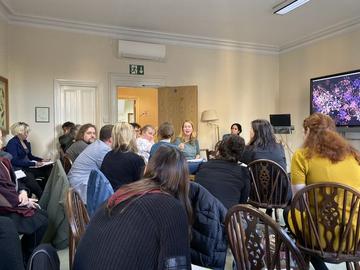 Lively discussion during the conference (picture by the Greene’s Institute)