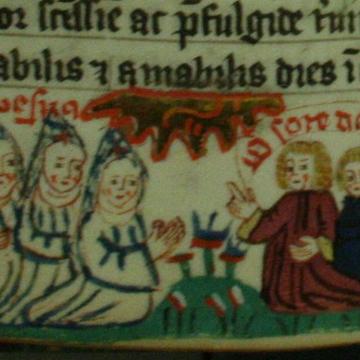 This article first appeared on KnowItWall.

Opening a book unfolds a new world. In the case of the pocket-sized prayer-book Oxford, Bodleian Library MS. Lat. liturg. f. 4, it is one of magic and surprises: gold dragons, an orchestra of angels, nuns and biblical figures (see figure 1 below) populate the margins of 584 packed pages. The black ink is laced with black, red, blue, and gold letters but even more colourful is the text itself, an idiosyncratic mix of flowery medieval Latin and vernacular poetry.

To find the significance of this visual and linguistic firework, it is necessary to trace the manuscript back to its origin and decipher or rather decode its text and decoration, as well as the link between the two. The Low German dialect is that spoken in Lüneburg, one of the centres of the Hanseatic League, the most important trade area in Europe before the EU. Lüneburg’s salt production financed Medingen, the convent in which this prayer-book was written around 1500. Every nun wrote several manuscripts as part of her personal devotion, each of them a jigsaw piece of a different shape and colour, constructing a bigger picture of female piety and agency.

We are extremely lucky that we can reconstruct their physical world in greater detail than perhaps any other medieval community. This is because the convents on the Lüneburg Heath survived as religious institutions through both the Protestant Reformation of the 16th and the Napoleonic Secularisation of the 19th century. The women had a remarkable staying power — and fortunately, they never disposed of any of their possessions: the world’s oldest spectacles, for example, were found under the choir stalls of the neighbouring convent Wienhausen. The convents’ sewing and writing tools, as well as their breathtaking architecture all provide a window into the rich spiritual life of the late Middle Ages, into a time when the nuns wrote letters, played the organ, educated girls, and looked after a large and prosperous community.

These books reveal to us not only the physical world in which the nuns lived, wrote and read manuscripts, but also the spiritual realm that they aspired toward. It is a world that cannot be seen with the physical eye. Rather, it has to be grasped with the ‘visio spiritualis’ (spiritual vision) and ‘visio intellectualis’ (sense of intellectual understanding). Their monastic training enabled the nuns to look beyond: when the priest raised the bread above the altar, the nuns could truly see the Christ-child being lifted from its cradle, taste the heavenly meal, hear the angels sing and feel the divine vibrations of a whole world dancing with joy.

This macrocosm of late medieval devotion is mirrored within the microcosm of the Oxford prayer-book. The book is meant to be carried around: at a size comparable to about six smartphones (stacked two wide, three high), its sturdy leather-covered boards just about fit into a hand. It had small clasps since it was mainly made up of parchment — an unruly, springy material which reminds us of the shape of the animal it was once part of. It could be read while dressing, walking along the cloisters to the nuns’ choir for the Office of the Hours or attending mass. Red lettered instructions served as stage directions for the spectacle of convent life, as a reminder to perform their prayers and meditations with heart, hand and voice. This was particularly important during the parts of the service in which the nuns could not actively participate.

On Easter Sunday, a whole parallel choreography unfolded. While laypeople physically worshipped the cross that the officiating priests carried through church, the nuns up on their choir made a spiritual offering “on the harpstrings of their soul”. After the clergy sang Victimae paschali laudes, the congregation answered with the German hymn Christ is upstande which promised that God will be the comforter (God de wel unse trost syn, 70v). The scene is imagined in the margin of a later page, where a boy with a flower wreath holds a song bubble containing the opening line of the hymn. Then, the voice of the writing nun calls out in jubilation, commenting on the song in mixed Latin and Low German: O dulce carmen, o mellifluum verbum “God wel vnse trost syn”! Wen wy den hebben, so enbeghere wy nicht mer, wy behouen ock nicht mer; ergo consolamini in hijs verbis. (O sweet song, o mellifluous word “God will be our comfort”! If this is the case, we neither want nor need anything else; let us take comfort in these words!)

In the next rubric, the nun is encouraged to embrace Christ in the “arms of her soul” and to greet him as her bridegroom coming to rescue her. Easter became an existential moment when engaging with the true meaning of the liturgy enabled the nun to be part of salvation history. All of this happened through the power of this pocket prayer-book, which came to the Bodleian through a series of sales after antiquarians came to view these devotional manuscripts as objects. However, the tactile quality of this book appealed differently to these collectors than it did to the nuns who wrote it and engaged with it on a daily basis.

And yet, the appeal of the book endures. Sensual experience (no white gloves allowed!) is the clue to recover a lost world, the real “Sound of Music” of nuns and laypeople singing together, the nuns in their white habits, the Lüneburg crowd in their Sunday best. Their songs of praise happen in a world full of gold, images and moveable parts (201v shows a paper veil covering a gold initial; 131v has a paper clipping of a flower girl pasted over a cut in the parchment (see figure 3 above)). Its enduring appeal lives on in the successors of the medieval nuns, namely in the Protestant women of today (see YouTube video below) who continue to share their passion for their historic buildings and spiritual heritage with the community around them, just as their predecessors did. They even wrote a cookbook with regional recipes Das Feuer hüten (in English: Tending the Hearth) and continue to welcome visitors into a world full of heavenly experience.

Click here to see a video of the Abbess of Lüne presenting her concept for the convent.