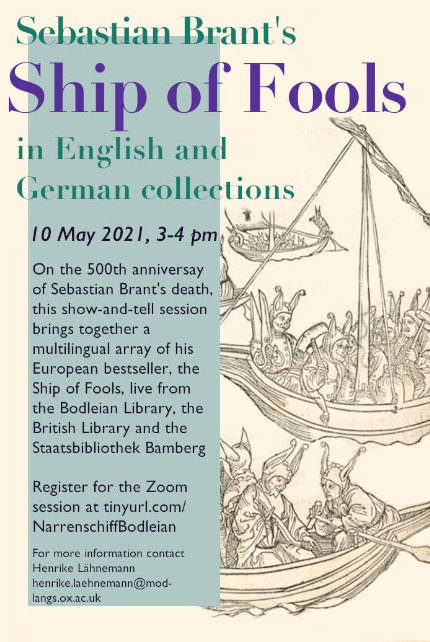 On the 500th anniversary of the death of Sebastian Brant, this show-and-tell session brings together a multilingual array of his European bestseller, the Ship of Fools, live from the Bodleian Library, the British Library and the Staatsbibliothek Bamberg.

Where? Register for the Zoom session at tinyurl.com/NarrenschiffBodleian

Copy of an Augsburg reprint of the Strasburg interpolation of the Ship of Fools.Oxford Bod., Auct. 7Q 5.20

How to bring light into hidden corners of medieval manuscript studies? “Dark Archives 20.20” provided the opportunity to approach the topic in an innovative, digital-born way. Here two of the Oxford Graduate students who took an active part in the conference reflect on their experience.

Tom Revell, the new Oxford Medieval Studies Events Organiser, writes about his experience of the conference:

“Dark Archives 20/20 was the first entirely-virtual conference I’d ever taken a role in running, but the groundwork Dr Pink had already put in organising the programme on the darkarchiv.es site, uploading the recorded papers to YouTube, and using Eventbrite to register attendees, made the day-to-day running of the keynotes, panels, debates and competitions much easier. Zoom’s Webinar functionalities allowed us to schedule all the sessions in advance, as well as implement a captioning software that worked very well. The Webinar’s Host and Co-hosts promoted  necessary speakers for a given session to ‘Panelist’ from the ‘Attendees’ list, and then (alongside a number of other organisers and graduate students from Oxford and from the University of Colorado) we formed a team of moderators who made sure the right people were on screen at the right time, supplemented the questions collected from social media by Llewelyn with questions from the Zoom chat, and generally ensured the smooth running of the live portion of the conference. The Chairs found the role of the moderators to be a great help in allowing them and their panelists to enjoy an as-normal-as-possible experience, complete with question and answer interaction (text and voice) with attendees. Streaming the Compline was a trickier part of my assignment. Zoom has a plug-in that allows impromptu streaming to YouTube, but providing a link to the stream before we went live required a little more preparation. However, the amazing performance of all involved was transmitted live without a hitch, and is now available publicly on the Dark Archives YouTube channel.”

“Early on, Dr. Pink delegated tasks astutely. I was made an administrator on all platforms used by Dark Archives about a week before the conference began, which meant I could use the full functionality of each platform and see exactly what was going on before and during the conference. As well as being able to manage the discussions over Zoom, we could also oversee everything that was happen on the conference’s Discord channel (which was more popular than I expected) and on Dark Archives’ YouTube channel (I was made a manager, using my own account, as was Tom, using the OMS account). However, as social media officer, most of my work happened before the conference started in earnest. The week beforehand, I galvanized excitement by tweeting out screenshots of some of the pre-recorded talks, and giving countdowns for the registration deadline, for talks going live, and for the beginning of the conference proper. Another task I was given was to administer the questions asked to speakers so that they could be discussed in a smooth and orderly fashion during the live sessions (we prioritised questions that were asked beforehand before going on to questions asked live in the Zoom Q&A or chat function). This involved scouring all the different platforms which participants could use to ask questions (YouTube comments, direct emails, the Discord channel, and, most of all, #DarkArchives on Twitter). I compiled these into separate word documents according to the sessions and sent them to the hosts of those sessions at least a day before their session, with updates every few hours when more came in. During the conference itself, each morning, I would send out a tweet outlining which talks registrants would need to (re)watch before the live sessions that day, and tag the relevant speakers – I also did this, in a slightly longer format, on our brand new Facebook page – and these summarizing tweets proved to be our most popular that week. Indeed, our Twitter account grew a fair amount during the build-up to Dark Archives, allowing us to pass the 3,000 followers mark!

Of the many challenges encountered during the preparation of the Compline service, connecting the ancient crypt of St Peter in the East to reasonably steady wi-fi turned out to be one of the easiest to overcome. After having solved some other technical issues, like the overwhelming echoes coming from the chapel, and having practised singing in split cohorts, the choir had to decide which convention to follow when chanting the Latin text. Any minor disagreement on whether a ‘c’ should be pronounced ‘k’ or like the Italian ‘ch’ became more audible when only a few singers were performing. Then again, if the service had taken place in medieval Oxford, would the words have been heavily anglicised instead? We opted for the more familiar pronunciation and things fell into place in the heat of the musical action.

I joined Henrike Lähnemann to form the Schola, and together we opened the service. With the few tealights we had lit purely for the purpose of creating a solemn image, our gowned figures cast enormous shadows on the grey stones behind us. Not quite gloomy, though a little on the chilly side, the atmosphere down in the crypt made my last service in Oxford a memorable one. And when our microphone was muted so that the other groups could sing their allocated parts, who could tell whether we were humming along?

Oxford Medieval Studies is one of the largest forums in the world for interdisciplinary research on the Middle Ages, bringing together over 200 academics and a large body of graduate students. The period of a thousand years from c.500 to c.1500 saw huge social change, political upheaval, technological revolution, intellectual debate, and artistic innovation across Europe and the wider world. In Oxford, medieval studies link disciplines such as Archaeology; Art History; Byzantine Studies; Classics; English; History; European, Middle- and Far-Eastern languages; Music; Philosophy; Theology and Religion; and work with heritage sites and institutions such as the Ashmolean Museum and the Bodleian Library. It also offers an interdisciplinary Master’s degree in Medieval Studies.

What Happens When We Expand the Chronology and Geography of Plague’s History? - Monica H. Green
YouTube Video VVVtNVpHZm5nczBVT3hacjBTR1hYdTBRLmdDVUJoVU9vaHAw