After the success of the 2022 ‘Transitions’ Conference, we invite you to the next instalment of the longest-standing medievalist PGR conference series. This year’s theme of Identities, Communities, and ‘Imagined Communities’ marks the 40-year anniversary of the publication of Benedict Anderson’s book on national identity. Observing all the uses medievalists have made of his theories in subsequent years, the conference celebrates the interdisciplinary currents that have benefitted academia in recent decades – Anderson, after all, did not initially believe his theories were suitable for the medieval world. We welcome respondents and delegates to reflect on how we use concepts of identity and community more broadly across medieval history. Society’s interest in its identities is arguably more topical today than it was in 1983 when Imagined Communities was first published. How did medieval communities see and perform their identities, how did this change over time, and why? What role did identities play – be they political, linguistic, or religious – in the consolidation of some communities and the subjugation of others?

We welcome abstracts from postgraduates and early-career researchers, exploring all the aspects and
approaches to concepts of identity and communities, in all relevant disciplines pertaining to the medieval
period, broadly construed c.500-c.1500. Abstracts are 300 words for 20-minute papers. This year’s
conference will be a hybrid event online and on the campus of the University of Bristol. 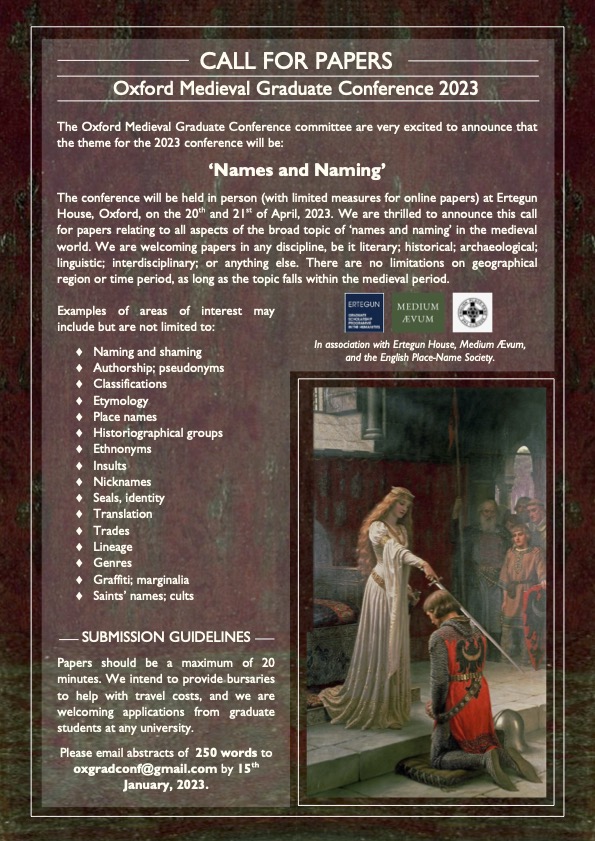 The Oxford Medieval Graduate Conference committee are very excited to announce that the theme for the 2023 conference will be: ‘Names and Naming’

The conference will be held in person (with limited measures for online papers) at Ertegun House, Oxford, on the 20th and 21st of April, 2023. We are thrilled to announce this call for papers relating to all aspects of the broad topic of ‘names and naming’ in the medieval world. We are welcoming papers in any discipline, be it literary; historical; archaeological; linguistic; interdisciplinary; or anything else. There are no limitations on geographical region or time period, as long as the topic falls within the medieval period.

Examples of areas of interest may include but are not limited to:

SUBMISSION GUIDELINES: Papers should be a maximum of 20 minutes. We intend to provide bursaries to help with travel costs, and we are welcoming applications from graduate students at any university.

Please email abstracts of 250 words to oxgradconf@gmail.com by 15th January, 2023. 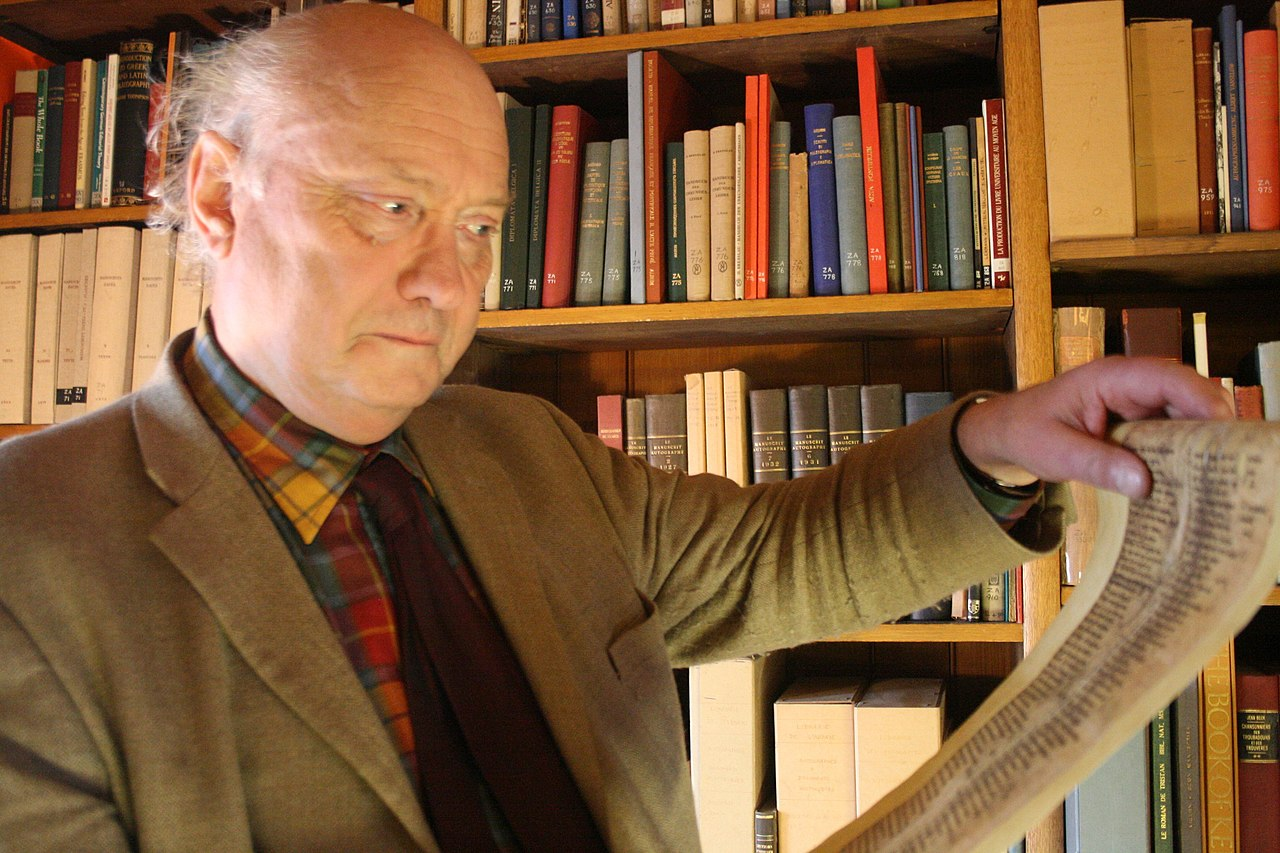 What: Literary, religious and manuscript cultures of the German-speaking lands: a symposium in memory of Nigel F. Palmer (1946-2022)

To celebrate the life and scholarship of Nigel F. Palmer, Professor of German Medieval Literary and Linguistic Studies at the University of Oxford, we invite expressions of interest from those who wish to honour his memory with an academic contribution to speak at a symposium in Oxford that is to take place 19-20 May 2023. Presentations of twenty minutes’ length are sought. They should speak to an aspect of the wide spectrum of Nigel’s intellectual interests, which ranged extensively within the broad scope of the literary and religious history of the German- and Dutch-speaking lands, treating Latin alongside the vernaculars, the early printed book alongside the manuscript, and the court and the city alongside the monastery and the convent. His primary intellectual contributions were methodological rather than theoretical, and he brought together a study of the book as a material object with the philological and linguistic discipline of the Germanophone academic tradition.

The first session planned for the afternoon of Friday 19 May will take place consequently in the Weston Library, and will consider the manuscript cultures of the German-speaking lands; presentations may take a workshop format, and may – though need not – focus upon one or more manuscripts in the Bodleian collections. The second and third sessions will take place on Saturday 20 May in the Taylorian Library, and will consider the religious and literary history of the German-speaking lands in relation to the questions, issues and working methods central to Nigel’s published scholarship.

We would request expressions of interest, of not more than one full page, to be received by 11 November 2022, to be sent to Stephen Mossman. We ask in advance for the understanding of all who submit that we anticipate receiving many more expressions of interest than we can accommodate within the schedule. A reception will be held at St Edmund Hall on the Saturday afternoon, to which all are cordially invited and welcome, followed by a dinner in College. Those planning to attend are advised to reserve accommodation in good time, e.g. via universityrooms. We hope to secure funding to support early career researchers in attending the symposium, but anticipate that participants will need to cover their travel and accommodation expenses. Details of the symposium and registration will be available through the Faculty of Medieval and Modern Languages web-site in early 2023.

Image: Nigel F. Palmer studying the facsimile of the Osterspiel von Muri on the gallery of the Taylor Institution Library. Photograph by Henrike Lähnemann

Following the successful Medieval Mystery Cycle 2.0, plans are underway for the third iteration of what has fast become an Oxford tradition. Please reserve the date of 22 April 2023 (Saturday before Trinity Term) and spread the word! We are looking for actors, directors, musicians, prop makers, and above all a graduate convenor who will take on the mantle of Eleanor Baker in masterminding the operation. Have a look at seh.ox.ac.uk/mystery-cycle for getting a sense of the scope and watching the plays performed in 2019 and 2022.

Please send expressions of interest for the Graduate Convenor by 30 June 2022 to Co-Directors Henrike Lähnemann and Lesley Smith under medieval@torch.ox.ac.uk