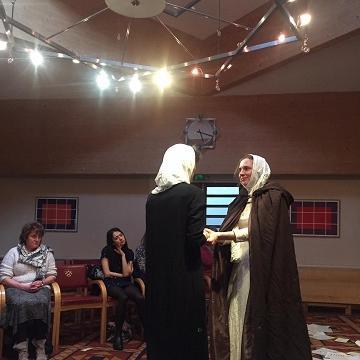 By Hannah Lucas and Lucy Brookes

We were delighted to welcome delegates to the Humanities Division on Thursday 14th March for a one-day symposium on themes of closure/non-closure, reception, adaptation, and textual performance in medieval literature. The programme promised a diverse array of papers, which did not disappoint in their synthesis of many productive threads, and which led us in a number of intriguing—and, at times, surprising—directions.

The day began with a panel entitled ‘Receiving Convention’, with the first paper given by David Arbesu, on the topic of the reception and interpretation of the Book of Sindibad in medieval Spain. David showed how tellings and re-tellings of the tales in the Sindibad’s ‘101 Nights’—a departure from the traditional and perhaps more familiar ‘1001 Nights’—had corrupted the meaning of the stories such that many have been rendered incomprehensible. David’s paper thereby introduced the issue of critical readings changing the meaning of the text. Following David was a paper from Sahar Ullah, who read the work of Sufi poet ʿĀ’ishah al-Bāʿūniyyah as a kind of “living poetry”. Sahar showed how the poet invokes former Sufi masters through the musicality, language, imagery and temporality of her poetry. This practice of remembrance, Sahar argued, renders poet and reader witness to the divine. Moreover, Sahar pointed to the confident statement that al-Bāʿūniyyah’s “words are telling,” a testimony which establishes the authority of her work. Sahar’s paper challenged representations of medieval Islamic women, especially in the absence of their intellectual positions. Finally, Hannah Piercy presented on happy endings in medieval romance, specifically in Eger and Grime and the Middle English Ipomadon. Hannah dealt with issues of convention and subjectivity, thinking about how identity is shaped by an understanding of one’s own narrative, using the notion of the “resistant reader” to question how our own dissatisfaction with a text might provoke critical readings.

The second panel ‘Recording Violence’, continued the focus on the validity and accuracy of textual reports: Abel Lorenzo Rodriguez presented on the long-term process of addition in texts and chronicles about violence in fifth-century to thirteenth-century Iberia, showing how new macabre details were retroactively added to historical documents, with anachronistic punishments included in texts to increase their sensationalist impact. Abel questioned how violence is told, once again drawing attention to the ambiguity and mutability of this telling. Next, Jinming Yi gave a paper on civic records in medieval York, showing that the scribes and dates of the ‘Freeman’s Register’, YCA MS D1, can be identified by the morphographical and lexicological details—in particular, Jinming highlighted the morphology of the ‘M’, which in the register of new mayoral responsibilities appears regularly! Jinming’s paper once more showed the institutional interest in retroactive interest in historiography on the part of institutional and governmental powers. The third paper was from Jason Jacobs, who presented on the chanson de geste, and the auditory aspects of the poetic tradition. Jacobs asked, “what did the chanson de geste sound like?”, addressing the audience of warriors and soldiers who may or may not have identified with the heroic acts they received aurally. Jacobs took issue with the concept of canonical exemplarity, asking how we know texts were “praised” as heroic or exemplary, instead suggesting that there is room for a more ambiguous subjectivity in the reception of performed texts.

After refreshments for lunch, the third panel, ‘Performing Poetry’, consisted of two papers from Lucy Brookes and Elena Volaris on the performance of emotion. Lucy examined the history of emotions in relation to some Middle English romances, arguing through a close reading of the term “woo” that romantic conventions can be constraining and controlling for the individuals within the narrative. She suggested that the characters are so governed by the strictures of conventionality that we often overlook the idiosyncrasies of their subjective emotional experiences. Elena Violaris followed this paper with an examination of Dante and the performance of pity, tracking the generation of compassionate feeling and arguing for “pity” as a chain reaction of emotional exchange: a network of relation which the text makes available to us. Elena drew on the concept of emotion as performance, in particular tears as a verification of emotional identity.

The fourth and final panel, ‘Living Iceland’, enjoyed three papers which dealt with medieval Icelandic literature. First, Brian McMahon presented on the spoken word in some Icelandic Saga manuscripts, arguing for orality as a productive means of understanding the agency of the storyteller within the “storytelling community”. Brian argued for a proactive collective of listeners or hearers, whose hearing changes the role of scribe, and thus transforming any overlayed or marginal remarks into parts of the story itself. Next, Margarita Birulya examined Sagas about Bishop Þorlákr, showing how historiographical material is interposed with story, and the bishop’s name is invoked repeatedly to prove the holiness of the person or place in question. Finally, Katherine Olley presented on kinship and closure in the Poetic Edda, showing how life events (including death!) are not the “final word” in the lifespan of the texts’ characters. Katherine’s paper therefore also addressed the contingency of closure and endings, demonstrating the difficulties in “having the last word” both narratologically and critically.

Following four rich panels, the symposium moved to Worcester College, where we enjoyed a performance of ‘Marge and Jules’ from playwriting duo, The Queynte Laydies (Sarah Anson and Máirín O’Hagan). This performance reimagined the tantalising meeting of medieval visionaries, Margery Kempe and Julian of Norwich, set in Julian’s anchorhold. Both amusing and intensely moving, the play offered moments including Julian as scribe of Margery’s visions, Margery’s questioning of the authenticity of her hearing of the voice of God, and overall, an enclosed space in which two women could share and discuss issues of theology, identity, and authority. The performance was followed by a discussion chaired by Professor Helen Barr, who directed questions to Sarah and Máirín which spoke to issues discussed throughout the day, particularly concerning the continuous process of adapting text to stage, the differences effected by audience and place/space, and the process of making an historical text accessible for non-specialist audiences.

The Queynte Laydies’ performance rounded off an exceptionally thought-provoking and dynamic symposium, which brought scholars together in an intimate and conversational format, to test out critical methodologies and ideas about critical reading and historiography. A particular highlight was the emphasis which emerged on communality and collectivity; how is a text produced if not through collective readings across time? This idea offers an identity to the reader—critical or not—of medieval literature, as a participant in a community of listeners, hearers, readers, critics; “passers-on” of meaning in the timeline of the text. We hope that the conference provided our delegates with new ways of thinking and approaching these works, and a sense of the active influence of text on reader, whether this involves being stopped in our tracks, or following the interpretative paths they lead us down, seemingly unendingly.

A particular thanks to TORCH and Oxford Medieval Studies for their kind financial and administrative support for the Symposium, to Professor Helen Barr and The Queynte Laydies, and to all our delegates.