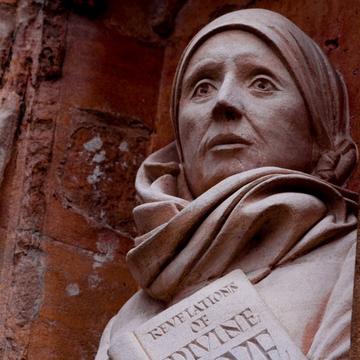 “Weren’t intelligent women in the Middle Ages seen as witches?” one of my theology undergrads once asked “Could they even read and write?”. These questions illustrate how many still think of the Middle Ages as “the Dark Ages” (an epithet long rejected by scholars), a time in which women lacked opportunities for education, reflection, and agency. Numerous texts by medieval women writers testify to reality being far more complex. What is more, many of these texts are religious in character: often, the earliest known text by a woman writer in the vernacular is a mystical, visionary or devotional text. These works suggest that life as a nun, devout laywoman, a “semi-religious”, or lay-sister (a kind of free-lance nun), allowed women to find “a room of one’s own”, to Virginia Woolf’s phrase. My name is Godelinde Gertrude Perk, and I am a Marie Skłdowska Curie Fellow at the faculty of Medieval and Modern Languages (supervised by Professor Henrike Lhnemann) and am delighted to introduce my two-year project “Women Making Memories: Liturgy and the Remembering Female Body in Medieval Holy Women’s Texts”, which started on the first of September 2019. (This project has received funding from the European Union’s Horizon 2020 research and innovation programme under the Marie Skłodowska-Curie grant agreement No 842443.)

Medieval women writers responded to and transformed the religious ideas of their times; my project investigates how they did so. Considering both well-known figures (Julian of Norwich), and lesser-known ones (the Sisters of the Modern Devout), it situates their texts in a particularly omnipresent but often understudied context, the liturgy of the Mass and the Divine Office. It should be kept in mind that devout women from medieval Europe frequently took part in the Divine Office (the monastic hours), nuns and lay-sisters, even several times a day, and strove to attend Mass as frequently as possible. They therefore knew the words, sounds, sights, and movements of the liturgy by heart: we find numerous references to these sensations and words in their texts.

Using thick description and close reading, I will investigate the role of memories of the liturgy in their works, analysing these texts through the prism of memoria, the medieval art of remembering. Medieval culture saw memoria as essential for moral behaviour and literary invention; medieval devout women deployed memory arts daily when meditating. The liturgy indirectly taught an art of memory as well. Because of the many sensations and movements the liturgy entailed, this art of memory involved both body and mind. Exploring the function of memoria therefore illuminates the role of the body in these women’s writings. The project, then, will unveil what and how medieval women’s texts want us to remember.

The project is uniquely international and multilingual; it is the first to juxtapose female-authored texts in different north-western European vernaculars, reflecting how medieval women’s devotion was not bound by national borders. I will compare six vernacular (auto)biographies and visionary texts in Middle Dutch, Middle English, and Middle High and Low German. They date from 1300 to 1500 and originate from the European regions now known as the Netherlands (the Diepenveen Sister-book, in Middle Dutch), Belgium (Mechtild van Rieviren’s visions), Germany (the Medingen prayerbook), Switzerland (the Katarinentaler Sister-book), and The United Kingdom (Julian of Norwich’ A Revelation of Love, and The Book of Margery Kempe). At the end of the project, I will have revealed European parallels and interactions between texts and writers. Ultimately, I endeavour to amplify medieval women’s voices and illuminate their significance to Europe’s cultural and spiritual heritage. This European quality is my reason for applying to the MSCA-IF, and for it being based at the Faculty for Medieval and Modern Languages and the University of Oxford, which hosts many academics considering medieval European religious and literary culture.

I will inform the general public and academic audiences of the project findings in a variety of ways, including several TORCH outputs. I am particularly passionate about appealing to non-academic audiences and helping them discover the wisdom, humour, and the fascinating lives of medieval women: in addition to publishing several academic articles, I will write a number of popular articles (available online), give popular lectures in museums and churches, possibly direct or contribute to a play, and tweet regularly from the project twitter account (@WMM_Oxford). Open Access is central to MSCA-IF projects, and I will make all outputs as freely accessible as possible.

You may be curious to know a little more about the post-doctoral researcher performing this project. I’m originally from the Netherlands, and have a background in English Literature. While doing my PhD in northern Sweden working on a dissertation tracing the evolution of Julian of Norwich’ narrative and theological thought, I developed an interest in the parallels between Middle English and Middle Dutch texts by women; my research has since shifted to a more comparative, European focus. (The texts that particularly caught my interest were the Middle Dutch Sister-books (collections of short biographies by nuns or laysisters of the sisters in the community). Some of you may be familiar with The Book of Margery Kempe; the Sister-books are similar in how they brim with with dramatic vignettes, vivid detail, pithy sayings and local colour). I also lived in Oxford during my PhD: in 2015, I spent four months here, immersing myself in its vibrant seminar culture and unique knowledge base. It was then that I met Professor Lähnnemann, whom I have since envisaged as the ideal supervisor for this project. After my PhD, I was employed as an associate professor at another Swedish university, that of Sundsvall, and looked for postdoc opportunities in order to broaden my knowledge of medieval women’s literature from north-western Europe and become one of the leading scholars in the nascent field of pan-European literary and devotional culture. (One of the academic endeavors from that time is a play produced together with two friends, which was based on the Middle Dutch Sister-Books; I hope to organize something similar in Oxford.). This year, I was awarded the Marie Sklodowska Curie Fellowship, as well as a Fulford Junior Research Fellowship at Somerville College, home to a dynamic medievalist community.

The project and the Fellowships contribute significantly to my academic and professional development, and I could not be more grateful for this wonderful opportunity and for being given the chance to return to Oxford. However, I am equally grateful to be working with many highly knowledgeable and generous scholars and to shed light upon medieval women’s minds, ultimately making their voices better heard.