One year in the Medieval Germanosphere, or: Reflections on the strange, yet fitting relationship between language studies and performance art

When I arrived in Oxford one year ago, as an Erasmus intern taken in by Henrike Lähnemann, professor of Medieval German, I couldn’t have imagined how my weekly schedule and the work habits associated with it would turn out to be in the end.

The languages and dialects associated with the term Medieval German are dead, obviously. They are hypostatized as written text, unchanging and lifeless, and your relationship with them will only ever be a one-sided one, as you silently consult the bulky manuscripts in the depths of a library or their digital counterparts somewhere on a badly programmed web page. That was the way I had always treated Medieval Latin – as a fixed and atemporal entity, being a mere tool to express the lofty and otherworldly conceptual reality of theologians and scholars alike.

This began to change, however, when the acting started. There were only small gestures in the beginning, such as reading out loud the texts you were about to discuss in the Medieval German graduate colloquium. That was the ritual to be done at the beginning of each session, and one would have to just go along with the text to make it work. The relationship between language and acting became clearer when it subtly pervaded social events among medievalists, too. Celebrating a medieval compline in the crypt of Teddy Hall’s own St Peter in the East might not be an intuitive choice, – it is dusty, has the narrowest stairway imaginable and there are spiders everywhere! – but it is an authentic choice. And traditionally having one person dress up as St Nicholas at a get-together on the eve of the fifth of December to moderate the performance of the Christmas carols – while at the same time getting a bit tipsy himself from the good German Glühwein – seems to be rather a symptom of a more general phenomenon than just some spontaneous whim at this point. But: why exactly are we doing this?

Performance art is a new means of expression that literature scholars bring to the academic world. Their objection to the old mode of textual reception is that it doesn’t go beyond the abstract, or better: mediated. They want to put the text to action, to act it out, to take from it its mediate status and make it immediate. It doesn’t do, therefore, to just employ a categorial scheme to analyze a given text because every analysis has always already taken away the immediacy of its content. To perform something is the attempt at a mode of presentation capable of transcending the abstract and affecting its recipients in an immediate manner. It is in this theatrical setting that the scholar becomes a director. Of course it is not an academic theatre in the sense of a replacement of the old, but rather a theatre within academia, coexisting with and complementing the old. 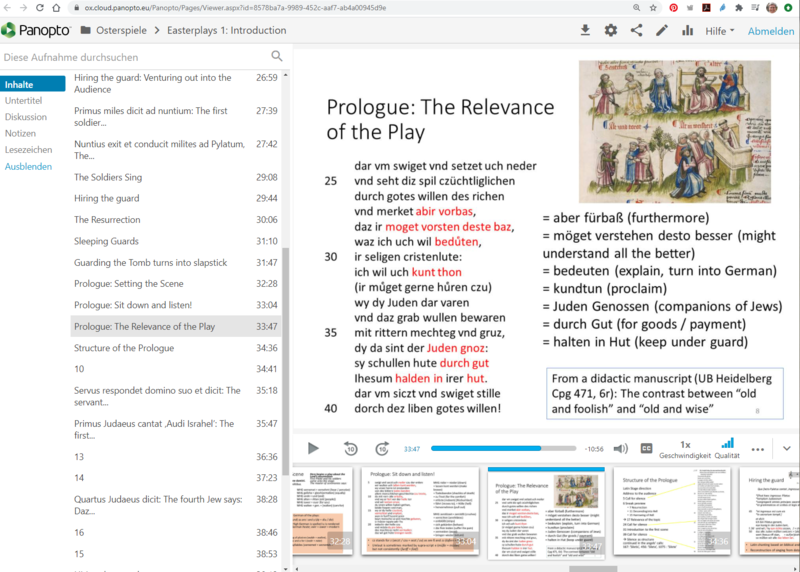 Screenshot of a lecture capture of the Easterplay recordings

My year in Oxford continued into January, and Henrike had already planned the next staging. Her Hilary lecture on medieval Easter plays were to be complemented by a two-person performance of the historical screenplay at the end of each session, and I was chosen as the second performer. (Watch the lecture series Easterplays recorded via the university lecture capture system panopto). I didn’t understand most of the textual content as they were written in some long-dead dialects of German I had no idea had even ever existed. Acting it out, however, this changed over the course of the term, as I gradually understood more of it, although in a more intuitive way. Most of the acting dynamics, I felt, didn’t go according to any preconceived plan, but were rather a matter of intuitively playing along. Towards the end of the term I learned about Oxford’s annual Easter play tradition and looked into some of the older performances from earlier years. Guess who was at the forefront every time? Language students. (Watch the Harrowing of Hell in Middle High German on the Mystery Cycle website)

The drama was at the artistic apex of ancient Greece, and no one captured its significance better than Friedrich Nietzsche in The Birth of Tragedy. It is no coincidence that Nietzsche, academically raised as a classical philologist, deliberately chose the novel as his genre of philosophical expression. His radical break with classical philosophy was less motivated by its contents, but more by the means of expression used to convey them. Only a gay science, the old organon of poetry-writing, of literary and dramatic art, would be able to express the human condition, the mode of us humans being in the world, without reducing us to the technical language of ossified metaphysics and morals. Fittingly, Nietzsche’s biggest and best known dispute didn’t involve another philosopher or academic in general, but Richard Wagner, the great German opera composer, for the allegedly heavy and exhausting atmosphere the latter created in his operas. Nietzsche himself prefers the light-hearted comedy, visualizing and detailed staging everything in his Thus Spoke Zarathustra to not only convey his philosophical message – which one may not entirely agree with – but also how it should be presented on stage. Sometimes Nietzsche even creates actor-characters within his literature, overtly hinting at its performative nature and complexifying the actor-character-relationship in the process.

Unfortunately, the real Easter play performance was cancelled due to the COVID19-pandemic steamrolling into each and every corner of society. But performance art as a means of exploration didn’t die then. The performances resumed, albeit in a much smaller fashion, by the end of July when it became possible again to meet up in small groups. By then, the very small performances were all recorded, without any live audience. The recording of the Hans Sachs dialogue between a catholic priest and a protestant cobbler involved a genuine medieval text and was recorded in one take over 45 minutes, though, without any warm-up. Performance art doesn’t need much preparation; it is just a matter of spontaneously going with the flow.

Fictional literature is never completely fixed. It think this lesson can be learned from all that. Every new reading creates its object anew; it is never just a bland repetition of something preexisting. Accordingly, performance art is not a scholarly method, let alone a scientific one. It is a reminder of this very incommensurability of all individual readings if you tried to grasp their essence in an abstract sense. In this eternal recurrence of new and unique readings and performances we do not seek to understand, but rather capitulate before the realization that in the end you can only choose to play along.

Konstantin Winters is a doctoral student in medieval history and philosophy at the University of Düsseldorf, editing part of the Commentary of the Sentences by William of Ware, a former Oxford student. During the academic year 2019/20, he worked as an Erasmus+ and DAAD funded intern at the Faculty of Medieval and Modern Languages at the University of Oxford.