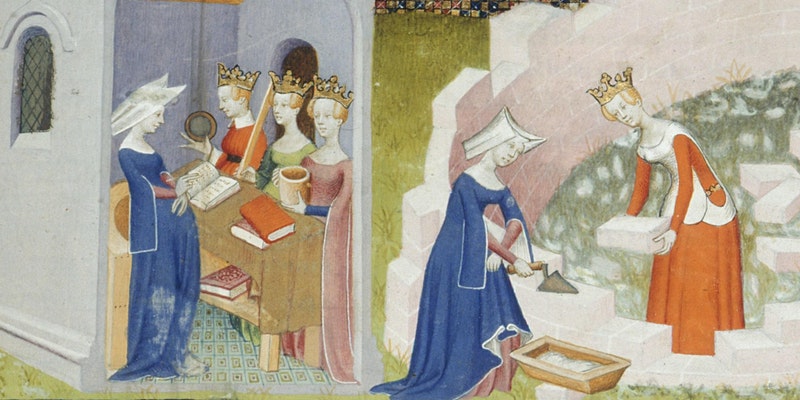 This workshop is for brand new and experienced Wikipedia editors who are interested in improving Wikipedia according to the aims of MedievalWiki (on which, see below). Lucy Moore (York) and Fran Allfrey (KCL) will be hosting.

We will gather on Zoom and introduce newcomers to the MedievalWiki project and how to get started. This will be a relaxed and informal workshop, designed to build the confidence of new and new-ish editors and to provide a social space for more experienced editors.

Everyone is welcome! Medievalists and non-medievalists, researchers, and students. If you can’t make the whole two hours, feel free to drop in just for the first or the second hour (let us know when you book when you plan to stop by).

MedievalWiki is a project to improve the quality of medieval articles on Wikipedia (and related projects including Wikimedia and Wikidata). The project is specifically dedicated to making and editing articles with citations to medieval scholars whose work is indebted to or develops feminist, queer, and critical race studies methods and theories. Making and editing biographical pages for Black medievalists and medievalists of colour, women and non-binary and queer medieval scholars, and artists whose work remakes the medieval is firmly within the MedievalWiki remit.

You can read more about the MedievalWiki project here https://medievalwomenwiki.wordpress.com/

“The Materiality and Textuality of Medieval Italian Lyric Poetry”
The physical act of copying, editing, printing, annotating, and circulating literature has the power to create and construct an intellectual figure as an author, an auctor and an auctoritas, that is, an author as “creator” and “cultural authority”. Through a selection of Dante’s and Petrarch’s texts in material contexts, and specific instances of the circulation and reception of their lyric poetry, this talk explores medieval and early modern authoriality; the qualities of books as “textual objects”, and the ways in which context, form, and annotation in single books may bestow cultural authority upon authors and works, at a time when lyric poetry was a key-genre in the cultural system. In the late Middle Ages and in the Renaissance, Dante and Petrarch were the two main authors governing the Italian cultural field, especially as regards lyric poetry, and they soon enjoyed international success. Dante and Petrarch have been appropriated, rewritten, and repurposed by various literary, political, and ideological movements across centuries, shaping a transnational European cultural identity.  What is more, the in-between space of multi-text and multi-author volumes is a repository of meaning and large cultural discourses: the significance of the order and selection of medieval lyric poems, and the meaning of lyric sequences is one of the crucial issues in literary hermeneutics, both for authorial and non-authorial collections.

“Form, Format, and formulae. Scribal conventions in first-millennium central Asia”
Central Asia in the first millennium CE, for the most part, was politically fragmented, and saw the flourishing of a number of (semi-)independent city-states, which produced secular documents in a multitude of languages/scripts, including Gandhari/Kharoshthi in Loulan, Khotanese/Brahmi in Khotan, Tocharian/Brahmi in Kucha, Sogdian/Aramaic in Sogdiana, and Bactrian/Greek in Bactria. A fairly large number of these documents have come to light in the last century or so, and received philological treatments individually or as a group. A synthetic analysis across the linguistic boundaries, however, is still lacking. In my talk, I will demonstrate that these documents display a number of common features in terms of form (materiality), format (diplomatics), and formulae (wording). Examples include notches on double wooden slips, sealing practice, indentations in letters and official orders, clauses and their sequence in purchase contracts, and shared technical lexicons of administration. All of these commonalities point to a shared scribal convention, the origin of which can be traced  back to the Kushan Empire. I will further explore the implication of this attribution for our understanding of the history of first-millennium Central Asia.
Here

We will send a Zoom link to all participants by the end of the week.

We invite papers which explore the relationship between morality, exemplarity, and the expression of emotion in medieval Insular texts, c. 700-1500.

The behaviours, ideas, and emotions that medieval writers, translators, and authors present as (im)moral and exemplary naturally fluctuate depending on time, place, genre, and language. Similarly, the textual representation and expression of emotion is culturally, temporally, and socially determined. This conference seeks to explore the nexus of morality, exemplarity, and emotion as presented throughout the medieval Insular world (Ireland and the British Isles), c. 700-c. 1500. In an effort to bring different types of texts into conversation with each other, and to probe generic boundaries, we encourage papers on a range of genres, including religious, heroic, romantic, and historic, written in Latin or the vernacular(s). In particular, we welcome papers which explore how the expression of emotion within texts was used to signal exemplary and/or (im)moral behaviour.

Topics include, but are not limited to, the following suggestions:

In addition, we seek participants for a roundtable discussion on:

Please send abstracts of approximately 200 words for a twenty-minute paper and a short bio to Dr Niamh Kehoe (Heinrich Heine Universität) (niamh.kehoe@hhu.de) by the 10th December 2021. If you have any queries, please email Niamh. While we currently anticipate that this will be an in-person event at Heinrich Heine University, we may decide to switch to an online event

Michaelmas Term is finally here, which means that our Medieval Booklet has now arrived! Inside you will find details of all of the seminars, events and reading groups happening this term, as well as some CFPs and save the dates for future events. Please do peruse and fill your calendars up!

I’d also like to take this opportunity to remind you of our blog, which not only includes an archive of the Medieval Matters newsletters, but also CFPs, posts from Oxford Medievalists, and a handy calendar so that you can always keep an eye on upcoming events and copy the details to your own online calendar. We would love to receive submissions for blog posts, whether these are events, reports on ongoing projects or conferences. If you have an idea for a blog post, please email luisa.ostacchini@ell.ox.ac.uk or lesley.smith@history.ox.ac.uk.

A new term means new faces around Oxford. If this is your first Medieval Matters email, I’d like to extend a warm welcome to the Oxford Medievalist community on behalf of the OMS team! If you are a course convenor for a medieval MSt, please block-enrol your students for the newsletter (or send me names for block enrolling) so that we catch all new MSt and doctoral students in medieval subjects and ensure that everyone receives all of the latest Oxford Medieval updates. If you know of any new medievalists who have joined Oxford and wish to have them added to the mailing list, please do contact me on luisa.ostacchini@ell.ox.uk. Alternatively, anybody can subscribe themselves to the Medieval Matters newsletter via the ‘About’ section of the blog – please do share the link with your incoming students.

Onto the announcements for this week:

Finally, a little wisdom from Alcuin to inspire you this week:

[‘Oh, how sweet life was, when we sat at leasure amongst the stacks of a learned man, amongst an abundance of books’ Ep. 281 ]

May your Michaelmas term be filled with such joys as these!

What?         In this workshop, the fascinating Murbach hymns – a Latin hymnal with Old High German interlinear glosses from the 8th/9th century – and their manuscript (Oxford, Bodleian Library MS. Junius 25) will be carefully examined regarding their translation technique, use and function, cultural background and transmission. Expect two days full of presentations and discussions, a consultation of this and other manuscripts and a live recitation of the hymns.

Updates and official registration on this page!

The symposium is being held virtually from October 19-22, 2021 and will include panels, informal coffee talks, an editor roundtable, and 1-on-1 sessions with invited editors.

Enmity is a sustaining force for systemic racism, a fervent antipathy toward a category of people. Enmity exists at the nexus of individual and group identity and produces difference by desiring opposition and supremacy, imagining separation by force, and willing conflict. Enmity unfolds in different ways in different places, according to local logics of territory, population, language, or culture, even as these geographical divisions are subject to constant change.

This interdisciplinary symposium, hosted by Rutgers University, focuses on how premodern racial discourses are tied to cartographical markers and ambitions. The notions of enmity and region provide a dual dynamic lens for tracing the racial repertoires that developed in response to increasingly hostile contention between premodern cultural and political forces. The symposium will invite scholars to take up this intersection between region and enmity, and to examine how belief in difference, or the emergence of polarizing structures and violent practices, configured race thinking and racial practices in ways that are both unique to different territories and that transcend them.

Register for the event: https://www.eventbrite.com/e/region-and-enmity-a-raceb4race-symposium-tickets-165791636247

An Interdisciplinary Online Conference at the University of Nottingham.

We invite papers which explore representations of spirits and spirituality in the medieval period from c. 600-1400 in Britain and Ireland, including, but not limited to, the following suggestions:

Please send abstracts of no more than 200 words to: eleni.ponirakis3@nottingham.ac.uk by the 30th November 2021.

The 5th Seminar in History of Domestic Violence and Abuse series, organized by Juliana Dresvina & Anu Lahtinen, University of Oxford & University of Helsinki.

Elena Chepel, ‘How to complain about violence if you are a woman: language and gender in Ptolemaic papyrus petitions’

Juliana Dresvina ‘The Uncomfortable Liber Confortatorius: Grooming in a monastery?’

Since January 2021, Lahtinen & Dresvina have been organizing online seminars on the long history of domestic violence and abuse. For more information about the following events, please follow the updates via https://tinyurl.com/histviolence

Register in advance for this meeting: https://helsinki.zoom.us/meeting/register/u5Mlc-CqqjMqGdPNvsw1b_wOS84lyG6YlkgI

Oxford University Numismatic Society is delighted to announce its call for papers for an online colloquium on the afternoon of Tuesday 30th November 2021. This virtual event held over MS Teams will aim to explore various aspects of base metal coinage(s) and the motives behind its production. We invite contributions from postgraduate students and ECR researchers from any institution on any period or coinage. We hope to welcome three speakers to deliver talks of 30 minutes each (with additional time for questions and responses). Topics might include:

What?            In this workshop, the fascinating Murbach hymns – a Latin hymnal with Old High German interlinear glosses from the 8/9th century – and their manuscript (Oxford, Bodleian Library MS. Junius 25) will be carefully examined regarding their translation technique, use and function, cultural background and transmission. Expect an afternoon full of presentations and discussions, a peek in the original manuscript and a live recitation of the hymns.