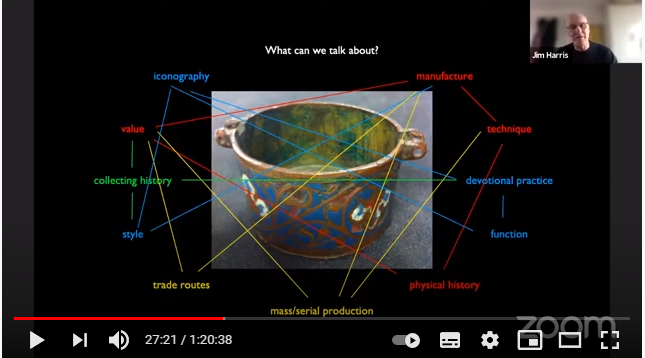 Visiting the Ashmolean Museum is one of the many great privileges that the University of Oxford has to offer. One can travel to a myriad of different times and places within its walls, and speaking personally, I am always eager for the encounter with the medieval past made possible through its collections. Recently, Jim Harris, the Andrew W Mellon Foundation Teaching Curator at the Ashmolean, gave the Oxford Medieval Studies Lecture for Trinity Term on precisely this topic. His talk, entitled Museum in the Middle: Medieval Things in a (Still) Medieval University, provided much food for thought about the wonder, loss, and strangeness in both the medieval and the museum.

Much of Jim’s teaching is rooted in the medieval collections, which has allowed him to engage both with the material culture of the Middle Ages and with those who study it – us medievalists. In Jim’s words, the “thread connecting medievalists to the past of their study is wonder,” and it is wonder that can be channeled through teaching with objects. As medievalists, this sense of wonder, the idea that knowledge can be derived from studying things we do not know about and do not yet understand, has driven us to acquire the skills to access that knowledge. We have learned new languages, both medieval and modern, how to decipher different scripts and to what location and periods these scripts belong, and how manuscripts were produced, among many other things, to bring us closer to the past that inspires so much wonder in us. Undertaking this learning allows us to further our connection to this past, as medieval people also had to learn new languages, ways of writing, methods of production, and many other skills to create the texts, documents, and objects that are now the subject of our study. Jim stressed that such wonder-motivated learning is not a product of the Early Modern Period or the Enlightenment, but rather is human, and was certainly present during the Middle Ages.

Jim described how teaching with objects can put this sense of wonder back into the curriculum. When we look at objects in ways that make them speak to us, using the skills that our sense of wonder has motivated us to learn, we become connected to a tradition, a history of looking, and the past that we look at is in turn bound to us through this act. Jim made clear that teaching with objects is not about being an art historian or portraying the rare and exceptional as exemplary, but rather about the wonder contained within the everyday and the mundane. Like the sense of wonder that drove us to learn how to communicate with the Middle Ages, wondering at its everyday objects once again brings us closer to the people who made them and to the period in which they lived.

The wonder that object-centred teaching can bring to the study of the Middle Ages speaks to what literary historian Stephen Greenblatt calls the resonance and wonder of museum objects. Greenblatt characterises resonance as the power of an object “to reach out beyond its formal boundaries to a larger world, to evoke in the viewer the complex, dynamic cultural forces from which it has emerged and for which it may be taken by a viewer to stand,” while wonder is an object’s power “to stop viewers in their tracks, to convey an arresting sense of uniqueness, to evoke an exalted attention.” While everyday objects, like the holy water ampulla associable with the Beckett pilgrimage and the pilgrim badge of John Schorne that Jim featured in his lecture, may not cause the viewer to stop in their tracks on display, in Jim’s words these objects become “capable of answering questions beyond what can be shared in a museum label” when they are taken off display and brought into the teaching room.

This can be seen clearly in Jim’s example of a small Limoges pyx, dated to c. 1200, that shows signs of its wear and use. While its well-preserved counterpart can be found on display in the museum, and it has been selected for display because of its condition and beauty, the pyx that Jim uses for teaching, with its worn exterior and signs of copper corrosion, has the potential to reveal more about the lives of medieval people than the one on display. This is because we can interrogate this object in ways that we cannot apply to the example on display: we can look inside this pyx, we can touch it, we can see it up close and from different angles and in different lights; we can ask questions about its manufacture, iconography, and use in devotional practice. While the ways of looking that we can use to interrogate the pyx on display are restricted by its exhibition, the pyx that Jim teaches with, though off display, becomes accessible to us from seemingly endless perspectives.

That this object can be interrogated not only by medievalists and other students of the humanities, but also students of medicine, neuroscience, and psychiatry, makes this what Jim calls an “agile” object with the “capacity to submit to interrogation from any number of disciplines.” In their agility, objects like the pyx cultivate resonance: they reach out to us from the past and can tell us how they were made, how they were used, and what they meant within the world that produced them. The resonance of these agile, everyday objects can stop us in our tracks and inspire our sense of wonder, as their agility allows us to discover their uniqueness and can further connect us to the past that they represent.

Loss is something that medievalists are often faced with. Whether it be the loss of texts through the deterioration or destruction of manuscripts, the loss of traditions and customs that have faded from memory, or loss due to the simple absence of information, the impact of loss is felt greatly within Medieval Studies. Loss is likewise ever-present in the museum, and Jim spoke of objects of loss: those that have been broken, discarded, or intentionally destroyed, or those that we no longer understand or recognize.

If we look at objects of loss with a sense of wonder, however, their loss can reveal much about the world from which they came. Jim demonstrated this with a small, broken corpus that had been removed from a crucifix, its arms deliberately broken and its feet bent. Jim explained that the stubs of its broken arms had been worn smooth not through cutting or filing but by touch, and when we look at this corpus this way, it reveals itself as a personal devotional object. This broken corpus, and other objects like it, had afterlives beyond their intended uses, and they take on yet another afterlife as museum objects.

When we, as medievalists, study the texts, documents, and objects that bring us closer to the past, these things too take on afterlives as the subjects of our study. Just as the producer of the crucifix to which the broken corpus originally belonged likely did not imagine that their creation would be transformed in this way, the medieval producers of the texts and documents that we study probably did not envision that they would be scrutinized by scholars in countless ways centuries later. We can interrogate these texts and documents from a variety of different perspectives: literary, historical, cultural, social, feminist, queer, ecocritical – the potential is almost endless. In studying the products of the past, we contribute to shaping the afterlife of the Middle Ages.

It is in our scrutiny and interrogation of the past that we will encounter loss, and we require certain ways of looking at what we study in order to see through the gaps. The ways we look at texts and documents are not unlike those that Jim uses to teach with objects like the pyx, as they allow us to extract information, to make new connections, and to expand our knowledge. As sociologist and museologist Tony Bennett says, these ways of looking allow objects “to be not just seen but seen through to establish some communion with the invisible to which they beckon.” Approaching both texts and objects, at times in tandem, from different perspectives allows us to see through to the past, and sometimes loss provides us with another view to the Middle Ages.

The Ashmolean was founded in 1683 by the polymath Elias Ashmole, and as such it is not technically a “medieval” museum. It exists, however, within a medieval university, and Oxford’s “medievalness” helps to remind us that the medieval did not simply stop on New Year’s Day of 1500. One need only to look at Oxford’s buildings and participate in its traditions to see that the medieval is still all around us. Medieval traditions and structures thus continued to shape society and culture long after what is now considered the “end” of the Middle Ages, and as Jim illustrated, this is certainly true of the Ashmolean and its collection.

Elias Ashmole acquired his collection from John Tradescant the Elder and his son, who were interested in gathering together rare and wonderous things from near and far in order to gain knowledge from them. The world in which the Tradescants and their associates were interested, Jim explained, was the world of medieval travel tales, and the medieval therefore had a large role to play in the formation of these early collections. The “medievalness” of the creation of knowledge from the gathering together of strangeness, and the documentation of this collecting, can be seen not only in Jim’s examples of the inventories of the Valois kings, who produced huge and highly detailed catalogues of their collections, but also in cathedral inventories that document the relics, offerings, and even sometimes natural curiosities that they possessed. As vast works of looking carefully and recording what is seen, Jim likened these prolific medieval inventories to the Ashmolean’s own digital archive, which currently makes over 200000 object records accessible online.

As the museum is often viewed as a strictly modern phenomenon, the Middle Ages are generally excluded from discussions of its development and practices. What Jim’s fantastic lecture drove home was that the wonder, loss, and strangeness found in both the medieval and the museum forge a connection between them: the museum can be medieval, and the medieval can be museal. Jim’s example of the Nuremberg Chronicle perfectly illustrates this connection in that it brings together the ancient and the current, the factual and the mythical, in a way that mirrors the museum’s ability to bring together different times and places in a single location. The Nuremberg Chronicle, as a product of the Middle Ages, and the museum are both what Michel Foucault would call “heterotopic,” in that they are capable of juxtaposing, “several sites that appear incompatible within a single space.” As Jim said, “the medieval mind is encompassing, and in itself a museum.”

Jim’s OMS Lecture is a must-see for medievalists and museologists alike. Though the Middle Ages may seem like another world, Jim underscored that the “middle age” between the past and the future is, in fact, now. There is perhaps nothing quite like a global pandemic to highlight just how much is shared between the medieval and the present. As we emerge from the third lockdown and museums reopen, this summer will hopefully allow us to visit the Ashmolean to encounter the wonder, loss, and strangeness of the medieval held therein.

Olivia Elliott Smith is a DPhil Candidate at Linacre College and a Social Sciences and Humanities Research Council of Canada Doctoral Fellow. Her research focusses on developing museological and heritage studies approaches to Old Norse literature. She has a background in museology and has worked for the Royal Ontario Museum and the Art Gallery of Ontario.