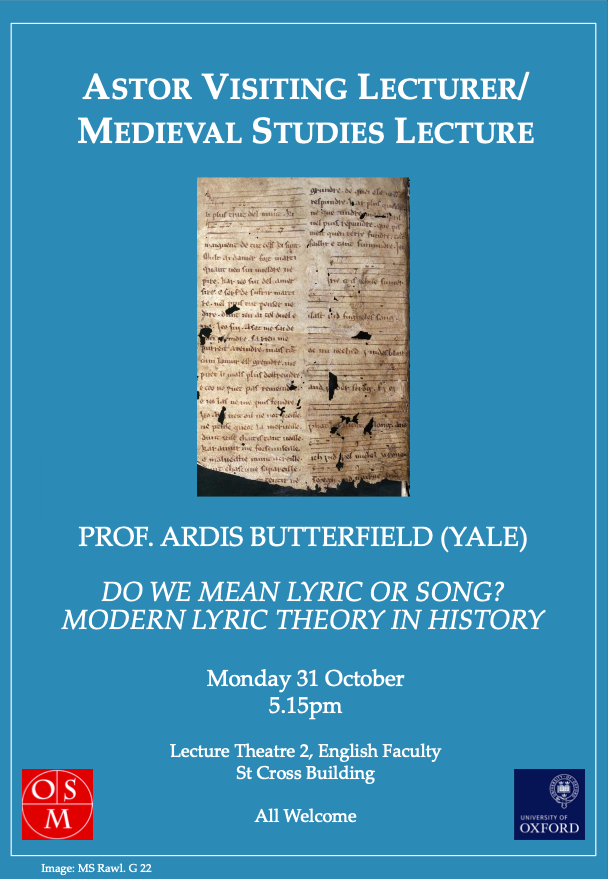 Ardis Butterfield is Marie Boroff Professor of English and (by courtesy) Professor of French and Music at Yale University. Her many published works investigate medieval literature and music across languages and national boundaries. Her books include Poetry and Music in Medieval France, and The Familiar Enemy: Chaucer, Language and the Nation in the Hundred Years War. She is currently completing a major new edition of medieval English lyrics.

‘Do we mean lyric or song? Modern lyric theory in history‘

Is ‘lyric’ something that has always existed as a category of poetry or music, or has it been created through a process of study and academic debate from the nineteenth century onwards – a process that Virginia Jackson has called ‘lyricization’? If that’s the case, where does medieval lyric fit in?

This lecture argued that medieval lyric is not on the edge of that debate, but at its centre. It does this by investigating the missing ingredient in many literary discussions of lyrics: their music. Thinking about the music for medieval lyrics (which in so many cases has not survived) can have an impact on modern theoretical discussions of poetry, requiring all of us to rethink our categories and assumptions.