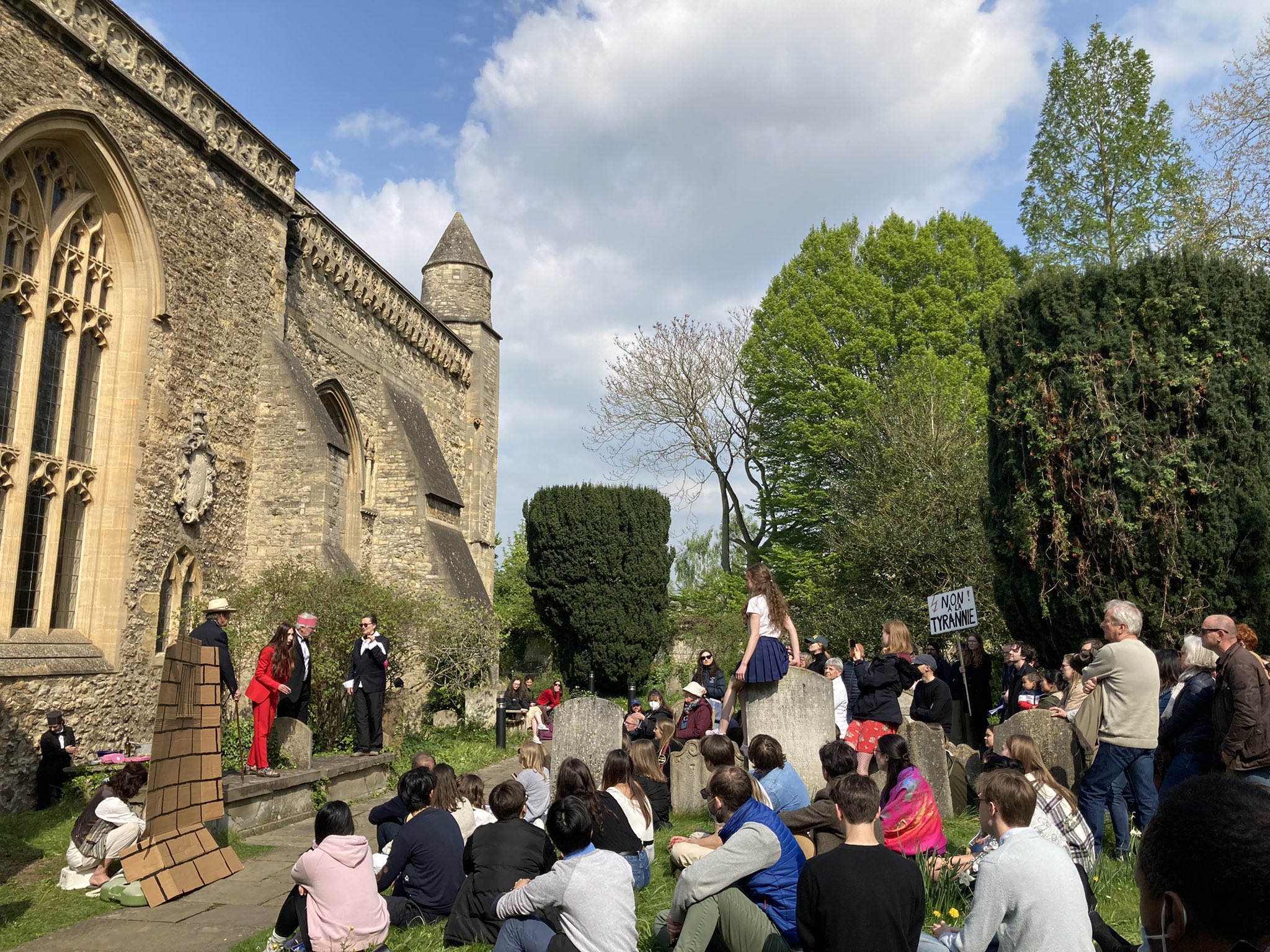 People ask me: “Why did you decide to do a play in French?”  Implication: it’s an English-speaking audience, and they won’t understand – middle-English bad enough.  Three responses to this one. 1. Political:  not good to live in a monoglot culture, and unlike modern scholarship the medieval world did not view life through the lens of the nation-state. 2. Theatrical:  to communicate through action and the body is a challenge which forces actors to engage with language on a different level, and reach out to their audience. 3. Intellectual:  venturing into Gréban’s text was a journey of discovery, as impenetrable hieroglyphs yielded slowly through rehearsal into recognisable speech patterns, with every phrase having its theatrical work to do. What looks like literary doggerel turns out to be theatrical gold.

An interesting research question follows – what are the cultural continuities that make Gréban’s mighty four-day passion play recognisably French, when set alongside the familiar English cycles?  Centralisation is one feature – responsibility not subdivided to autonomous guilds, but a single integrated work for an urban community to mount.  Another is the French ability to listen and maintain concentration upon the word.  In the English texts, action typically takes place between stanzas, but in the French text couplets conjoin speeches, so each new speaker has a rhyme to echo in order to come in on cue, a feature we found invaluable.  The sustained rhythmic flow ratchets up the tension, with enough variety of register and poetic form to hold the spectator’s attention. Like the alexandrines of Racine, the eight-syllable medieval line has a lilt that asks to be animated by the arms, so different from English metres which asked to be stamped with the feet.

After seeing the performance, a friend asked me: “What lesson was the play is supposed to impart?”  Implication: medieval theatre was didactic, a case of the church telling the peasants what to think. There is no simple moral to the John the Baptist sequence.  In the artistic structure John’s martyrdom is there because it foreshadows Christ’s.  People didn’t need telling that tyrants are venal, rather, it’s the recognisable social reality upon which a drama is built. Herod has his reasons for acting, and he washes his hands like Pilate. The medieval Salome is an enigma – we are free to draw our own conclusions, not told what to think. The urge to create theatre or art is a human constant, responding to the sensation of life as a cosmic mystery.  The idea that medieval theatre is ‘didactic’ is a handy modernist cliché, serving the narrative of progress, and all the cultural arrogance which that narrative commonly instils.  My preferred picture of the longue durée is one of progressive fragmentation, and I find in medieval theatre a holistic model of how theatre used to embrace and address a complete community in all its diversity, along with the gamut of human experience – comic and tragic, bestial and sublime – before dedicated theatre buildings and professionalism in acting and penmanship locked theatre into its lonely compartment.

David Wiles is Emeritus Professor of Drama at the University of Exeter, and lives in Iffley. He is a theatre historian whose main specialisms have been Greek and Shakespearean drama. He wrote the entry on medieval theatre for the Oxford Illustrated History of the Theatre. His medieval CV includes a student production of the plays of the Wakefield Master in the gardens of Westminster Abbey, Mankynde in the Burton Taylor rooms, a crucifixion on a farmer’s trailer in Buckingham marketplace, staging three plays by the C10th nun Roswitha, and a community production of the N-Town Creation/Fall and York Noah in Iffley.