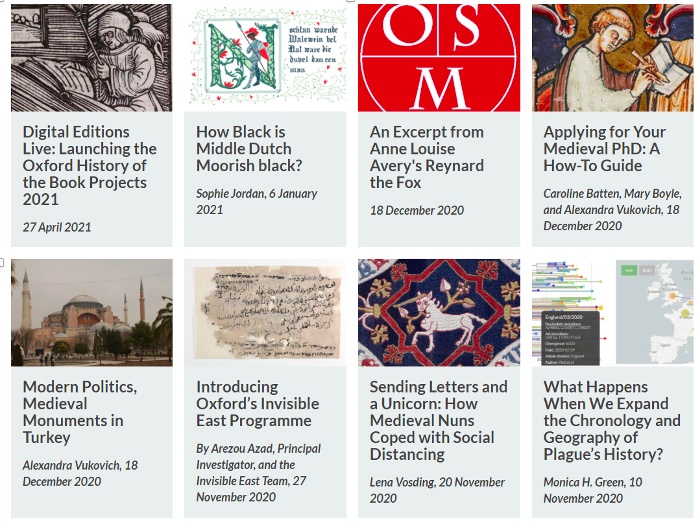 Oxford Medieval Studies has had another hugely productive year, despite – or even partly because of – the pandemic. Following the excellent advice of TORCH’s Nikki Carter, we decided to expand the team to cover different aspects of communication and online events management (see image and the report on the team). Under the stewardship of Caroline Batten as Comms Officer who developed the weekly email into a poetic artform, a whole wassail of postgraduate medievalists pulled the digital strings, commissioned and wrote blog posts, ran conferences, tweeted, recorded roundtables, and in between used every open air medieval venue around Oxford to meet covid-safe in person. A splendid example for this was the ‘Dark Archives 2.0’ conference which kicked off the academic year (read a report by Llewelyn and Tom about their experience in running the conference); Stephen Pink who organised this for Medium Aevum had already in 2019 conceived this as a digital-born conference (http://darkarchiv.es/) so that in September 2020 we were ahead of the learning curve of zoomified academic life. We even dared – and pulled off – a medieval Compline, sung in Latin from five locations around Oxford, including the Norman Crypt of St-Peter-in-the-East, the library church of St Edmund Hall.

The Hilary Term Interdisciplinary Lecture, live streamed via the OMS Youtube channel, was delivered by Prof. William Chester Jordan, as was the reflection by Jim Harris from the Ashmolean on the importance of objects for teaching medieval studies. Together, the videos of the OMS channel attracted several thousand views since its start a year ago. The medieval studies booklets have been downloaded over 1500 times, the weekly newsletter has over 700 subscribers and the twitter feed @OxMedStud is reaching nearly 5,000 followers.

With the new academic year, we are starting to bring back in-person events while continuing with online events for outreach purposes. What definitely will be a live all-sensory event is the second edition of the Medieval Mystery Cycle which is planned for 23 April 2021 and will bring together a dozen different groups of medievalists, performing multi-lingually in various locations around St Edmund Hall. Like 2019, it will be directed by Henrike Lähnemann and Lesley Smith who has also now taken on the role as Co-Director. Also new in the team is Luisa Ostacchini who has taken over the Communications Officer role from Caroline Batten and is making the weekly emails even more colourful with newly captioned snippets from Oxford manuscripts.