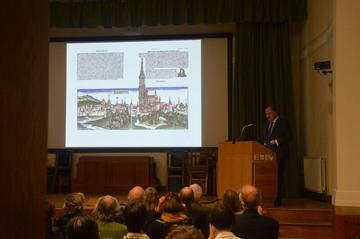 This year’s Medieval Studies lecture took on a slightly different form, as not just the annual celebration of the interdisciplinary study of medieval culture but also of Professor Nigel Palmer’s 70th birthday. It was therefore highly appropriate that Dr Stephen Mossman, who wrote his doctorate in the Oxford German sub-faculty but now lectures in the Manchester History department and who himself was a former pupil of Nigel, was able to deliver this year’s highly memorable and engaging lecture.

The focus of Stephen’s lecture was devotional culture in late medieval Strasbourg. The city presents a particular challenge for those attempting to reconstruct its literary, religious and cultural history because of the destruction of the town’s municipal library in its bombardment in the Franco-Prussian war. Stephen offered a number of possibilities of how this could nonetheless be possible, drawing on surviving archival sources, art and architecture from the city, even taking us inside a Strasbourg clothes shop where the back room houses a number of important wall paintings. He showed through an analysis of widely dispersed manuscripts how connections to Strasbourg could still be traced. He underlined the importance of the Alsatian city through the example of the Dutch mystic Jan van Ruusbroec, the transmission of whose works centred on Brabant but also Strasbourg, as religious and intellectual trends flowed up the Rhine, often directly.

A highlight of the lecture was undoubtedly the ‘great reveal’ of Nigel’s birthday present, a fifteenth century Carthusian manuscript in its original limp binding bought by the Bodleian library. This collection of devotional texts, focussed on the Passion (such as Bonaventure) and Carthusian spirituality (such as Adam of Dryburgh), contains a reference to a Strasbourg Carthusian famulus, a significant discovery given the particular transmission situation from the city. Thanks to references to the diocese of Trier in the binding material, Stephen suggested that the manuscript was produced in the Koblenz Charterhouse and made its way to Strasbourg. Nevertheless Monika Studer, in a colloquium the following day on German Manuscripts in Oxford, suggested through a comparison with a Basel manuscript from the Strasbourg Charterhouse, that the Oxford manuscript could in fact have been produced there. Nigel had no idea about the existence of the manuscript or that it had been purchased by the Bodleian: further research is now an exciting possibility.

The Strasbourg Charterhouse manuscript was one strand in Stephen’s lecture on the central importance of a new kind of domestic devotion within Strasbourg in the later Middle Ages. He showed how the division between cloister and world was less pronounced and more permeable than has previously been recognised. Institutions such as the Strasbourg Charterhouse and the Hospitaller commandery at the Grüner Wörth (founded 1367) were at the forefront of a new lay, devotional culture. These institutions, less connected to the town’s guilds but more with its citizenship, offered a particular blend of monastic and worldly devotion and offered a distinctive development from earlier forms of monastic, urban spirituality. Contemporary writers suggested that the decline of monasteries lay less in their separation from the world, but rather in the lack of lay oversight.

The developments in these institutions paralleled a rise of a new understanding of domesticity, emerging in the fourteenth century, in which qualities such as orderliness and privacy came more to the fore. An increased focus on interiority was not just evident in Flemish or Italian art, but was in evidence in Strasbourg as the domestic sphere became sacralised. Altar pieces such as the Meister des Paradiesgärtlein’s altar piece ‘Joseph’s Doubt’ (1430), were one such media in which this became clear and were part of a widespread phenomena in stained glass, tapestries and wall paintings. The domestic and the sacred had become merged.

Following the talk, a drinks reception was held in the Taylor and the newly-acquired manuscript was on display (behind glass!). Strasbourg was then the focus of attention at the morning session the following day at a colloquium in the Weston Library on German manuscripts in Oxford. Former students, colleagues and friends of Nigel gave a number of short presentations on various manuscripts held in Oxford, including from the Taylorian and Merton College Library, and suggested various palaeographical, codicological and textual approaches to a diverse set of material ranging from a set of eighth century psalms to an early seventeenth century Yiddish songbook.

You can watch the lecture here.