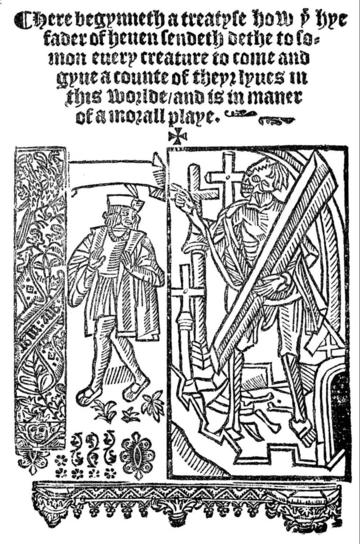 ‘The bottom line is that, even when written with probing wit by [Carol Ann] Duffy, medieval morality plays are not the place to go to for sophisticated characters and gripping plot twists.’

TimeOut’s review of the recent National Theatre production of Duffy’s Everyman articulated a sense that the medieval play’s 2015 update was perhaps hampered by its late fifteenth- or early sixteenth-century origins. Reviews of the play – whether the reviewers loved it or loathed it – returned frequently to what they perceived as the aesthetic and intellectual paucity of the medieval Everyman upon which Duffy based her twenty-first century adaptation.  They contrasted her ‘memorable characters’ with the ‘intrinsic thinness’ of the medieval play (TimeOut again); they described the play as ‘dramatically threadbare’, lacking ‘psychological substance’, but revealing that ‘that’s partly the limitation of the medieval source material’ (The Telegraph); or they congratulated her on making a now-irrelevant piece of medieval literature speak to contemporary concerns: ‘what was originally church propaganda has been turned… into a scathing assault on the myopic materialism of the modern age’ (The Guardian).

As a medievalist with research specialisms in translation and medieval drama, these reviews rather got my goat.  It wasn’t that so many reviewers enjoyed Everyman’s 2015 incarnation: I too thought it was outstanding – thought-provoking, terrifying and moving in equal measure.  My own academic work centres in part upon the re-creative and critical potential which resides in translation, and I was excited by the ways in which Duffy had creatively responded to the dialogic form, the sounds and rhythms of the medieval play, as well as to its complex ethical and soteriological concerns.  My frustration with the critical reception of her work arose principally from the fact that so many reviewers seemed to take as read the tediousness of the medieval Everyman, to cheerfully assert its poor quality as drama and the unsophistication of its intellectual endeavours.

Everyman, to me, is emphatically not a dramatically limited or unsubtle play; nor is it simply ‘church propaganda’ aimed at a credulous, unquestioning medieval Catholic audience.  The play speaks to shared and complex apprehensions, imaginings and terrors. It begins as an abstracted, allegorical dramatization of a character called Dethe’s approach to a character called ‘Everyman’ – who represents each and every one of us – and it concludes as an attempt to actively think through and beyond the end of our lives.  It asks, how can we prepare ourselves for death?  How do we give shape to what happens when we die, in terms of the ‘experience’ of dying?  How do we imagine death – not just in the sense of watching a character, on-stage, dying, but rather ‘from the inside’: what it’s like to go through the process of becoming not-alive?  Can we even conceive of this state, given that the acts of thinking, imagining and questioning are all, in some senses, predicated on the state of being alive and conscious – and this is the one thing we won’t be when we die?

In its sixteenth-century printed editions, Everyman travels with a subtitle: ‘a tretyse… in maner of a morall pleye’.  The term ‘tretyse’ perhaps suggests something other than drama – yet the fact that it is ‘in maner of a pleye’ is also key – what is it that performance brings?  One of the key elements here is sophisticated on-stage embodiment of allegorical concepts.  Everyman begins with the stage representing its audience’s own world, or something like it – watching, we’re apparently on the outside, as Everyman, an individual, a character external to us, even as we know that allegorically ‘represents’ us all, meets (quite literally) his Dethe, and then seeks out some other characters – his Felawshyp, or friendships; his Kindrede and Cosyn, or family members; his Goodes, or possessions – to attempt to persuade them (fruitlessly) to help him make his reckoning before God. Once his worldly goods have left Everyman, he’s forced to seek out his Good Dedes, and this moment marks a pivot in the play.  On one level, that’s because Everyman has turned to the ‘right’ people, things or processes to help him secure salvation – his own good deeds, and Knowledge, who points the way to the sacraments of Confession and extreme unction at the hands of a priest – so it marks a movement from bad choices to good, from despair to hope.

But it also marks a pivot in terms of what we, as the audience, are watching, in that the playing space suddenly ceases to represent a world peopled by other individuals and characters (friends, family, objects Everyman owns), and begins to represent the internal world of Everyman himself.  The stage disorientingly shifts to become the space inside his mind and body, which is peopled by his own physical and psychological forces, each played by a different actor: his Strength, his Beaute, his Fyve Wyttes or five senses, his Discrecion, his Knowledge.  Everyman, then, is allowed to enter a conversation with parts of himself, to become sensitised to the presence of the faculties within him which allow him to experience, to know, to interact with other individuals and the world – to see, to hear, to touch, to taste, to smell, to feel, to move, to learn – in a word, to live.   At the play’s climax, Everyman is stripped of these faculties one by one in a really challenging attempt to imagine and perform, not what it looks like when an individual dies but what it is like to experience death within a fractured and multi-voiced human psyche, moment by moment.  And because Everyman is who he is – each and every one of us – the space of the stage becomes in some senses the inside of everyone’s head.  It forces us all to attempt to imagine a conscious calling into being, then a gradual abandonment of our own, unique and personal bodily and psychological attributes – to confront our own mortality.  The play certainly does express an orthodox medieval Christian message about salvation: that it can only be assured through an intricate mixture of our own works during our lifetimes and the operation of divine grace; that the sacraments, particularly penance, mediated through the proper ecclesiastical authorities, are key to that process.  Yet the questions that it asks about the terrifying and disorientating experience of dying are no less resonant for the fact that they are approached through this framework.

It was with all this in mind that I embarked, in November 2015, on my own production of Everyman at the generous invitation of the University Church, using mainly my second-year English students as actors.  Many saw the production as an opportunity for them to become far more familiar with a medieval text, and to appreciate more fully its dramatic workings, than if they had simply read it for a tutorial.   My own aims were two-fold: one was certainly pedagogic, in that I too hoped for these outcomes for my English students, and was curious to see how performing the play would impact on their Middle English comprehension and close reading skills.  However, I also wanted to interrogate, through performance, the assessments of Everyman prevalent in press reviews of Duffy’s play.  Would my students succeed in conveying to a non-specialist audience the complex questions that the medieval play poses, in rendering them critically engaging and thought-provoking?  Could Everyman be provocative of discussion and interest, and could that challenge some ideas about the ‘relevance’ of medieval literature to today’s culture, and how that ‘relevance’ might be conceptualised?  I wasn’t trying to suggest that the medieval play holds up a straightforward mirror to our own, twenty-first century preoccupations and desires, or that ‘medieval people were just like us’ (for a compelling critique of ‘relevance’ and an argument for the importance of underlining alterity in relation to medieval literature, see Marion Turner’s post here).  What I wanted was to show that experiencing the medieval play on its own terms could provoke questions and conversations; that the play was ‘relevant’ in the sense that it challenged us to think.

We performed to a full house in the University Church’s Old Library, and the audience comprised a wonderful mixture of academic colleagues (largely non-medievalist), students and members of the public.  We held an audience Q and A session after the performance, in which all the actors took part, and the questions they were asked – about the process of representing and embodying abstract forces such as Fyve Wyttes, about the shifting ownership of Knowledge throughout the play and how its staging might convey this, about the role and presence of God in the world, the ambiguous potential for corruption amongst His representatives, the Priesthood, and the consolatory, supplicatory presence of embodied, human Good Dedes at the moment of death – left me in no doubt that the medieval play had been as generative of thought and engagement as I had hoped.

The pedagogical impact, too, has been rich: although perhaps not primarily in the areas I’d anticipated.  Certainly, performing the play forced the students to understand every single word or line spoken by their character(s), and so forced them to think through sometimes confusing or counterintuitive syntax carefully, to notice the impact of verse form and register on meaning.  This is especially important in a play like Everyman where the actors have to give embodied shape to forces and concepts which have no ‘set’ physical form.  There was a danger that the play would become very static – two or more allegorical characters standing still in conversation – and we worked hard on translating close reading into dynamic, physical performance.  Yet some of the most rewarding pedagogical outcomes that I’ve seen have been in students’ grasp of more conceptual ideas and challenges.  In class, we have discussed shifting or co-existent times and spaces in texts; or tensions between the abstract and the ‘real’, the human and the divine, and a student has begun with ‘it’s a bit like in Everyman, when…’  The play seems to have formed a reference point, a shared set of ideas and questions which can help to understand other unfamiliar medieval texts.  It also gave the students an opportunity to mix theatrical creativity fully with their academic work: their insights, suggestions and intellectual excitement were crucial in rehearsal (you can read about two actors’ perspectives here.  I was very proud of them as they confidently and sensitively fielded questions about our creative work: I realised in those moments just how much they had taken from the process, in both an academic and non-academic sense.

It’s for all these reasons that I’ll be returning to the University Church in 7th week Trinity Term with (hopefully) a new set of student performers and a new medieval play: we warmly invite readers to join us.  (For further information, email olivia.robinson@bnc.ox.ac.uk or penny.boxall@universitychurch.ox.ac.uk).