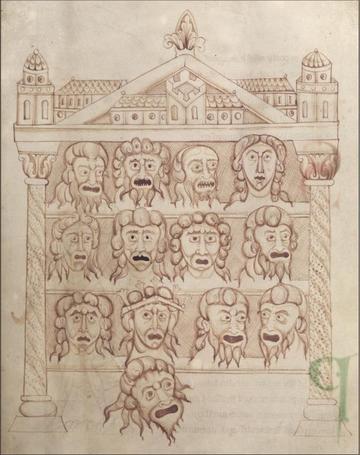 Click here to view the podcast of the event.

Interdisciplinarity, like breaking up, is hard to do. It’s even harder when you only have 10 minutes. Four professors of diverse medieval disciplines took up the challenge at the Main Hall of the Taylor Institution for the Oxford Medieval Studies launch event.

The brief was to show us how medievalists can ‘cross boundaries’ by tackling a text or artifact from outside their own comfort zone. Their responses were intriguingly varied. Henrike Lähnemann (Medieval German) was particularly transgressive, tracing the story and iconography of Tristan and Iseult—perhaps best known to moderns from the Wagner opera—across all sorts of boundaries, disciplinary and otherwise: political borders; languages; text and object; secular and sacred. David Wallace (English Literature) drew on his experience editing a history of medieval European literature(s) to evoke the interconnectedness of late medieval western Eurasia. His account broke down the (modern) political boundaries of Europe to remodel medieval literary history as a series of ‘itineraries’. Emma Dillon (Music) set out the need for a new conception of the medieval ‘song’ which integrates the performable lyric and notation beloved of musicologists with the depictions of music-making which punctuate romance literature. Using the work of R. Murray Schafer on ‘soundscapes’, she suggested that we should listen more carefully to the joyful noise conjured by medieval authors. Finally, Chris Wickham (History) delivered a characteristically pointed reappraisal of the historical value of Icelandic sagas. Focusing on a single, difficult-to-translate word (virðing: ‘credit/honour’) in the saga of Hrafnkell, he convincingly argued that the (obviously fictional) sagas, when carefully handled by historians and philologists, allow us to capture something of the distinctive nature of medieval Icelandic society.

Questions from the floor ranged from the need for collaborative teaching of medieval Latin (a suggestion strongly applauded in the room) to the big philosophical question at the heart of the evening: is it really possible to be truly interdisciplinary, or will medievalists (and others) always remain poachers sneaking onto the territory of their colleagues? It is a much debated question and there are good arguments either way.

What this evening suggested (to me, at least) was that there are two different sorts of ‘interdisciplinarity’ which can be distinguished—and which are worth pursuing in Oxford. One is decidedly pragmatic: collaboration across the boundaries of faculties and disciplines which often no longer make sense as the sole institutional settings for what we do. This is the creative reforming of disciplines to gather together like-minded scholars who share particular approaches to particular forms of evidence: something already begun in the many dedicated ‘centres’ dotting the landscape of Oxford. In my own field, I would mention the Centres for Late Antiquity (OCLA) and Byzantine Studies (LABS), which bring together historians, theologians, archaeologists, classical and medieval linguists and litterateurs—among many others.

In some senses, though, this is not *really* interdisciplinarity—certainly not by the terms of the persuasively iconoclastic argument presented by Guy Halsall in the link above—but simply the creation of a new discipline with its own scholarly culture. For someone to embody interdisciplinarity in their own scholarly person would require them, instead, to excel—and, just as important, be accepted as a practitioner—in multiple fields of inquiry at once. (That is—for example—to write books and papers on material evidence which speak to archaeological problems, while simultaneously winning acclaim as an exegete of medieval Italian poetry). Halsall sets out the very real constraints on what any one individual might achieve (who has the time to learn all of those skills, languages and subtle codes of academic practice?). Setting this unworkable ideal to one side, all four presentations nevertheless showed just how important familiarity with (and indeed proficiency in) a wide range of methods and a variety of evidence is for medievalists.

This is where I think it is best to envisage the crossing of disciplines as a process. The evening provided numerous examples of how the meetings of very different medieval minds might be achieved and the results it might provide, from the chance coincidence (literary scholars stumbling across an archaeological dig and using their knowledge of liturgy to correct the plans of a medieval abbey), to something more sustained and—dare I say it—institutional. Here, pragmatism and aspiration need not be mutually exclusive. As Chris Wickham noted, as a historian, he asks different questions of material evidence to those of archaeologists—anyone interested in medieval stone supply may have felt short-changed here!—but there is a common core of problems where he and they can collaborate. Each of us could delineate our own intellectual interests along similar lines.

As decades of revisionist scholarship have drummed into us, medieval frontiers were not lines on a map, but zones of interaction. The same goes for our disciplinary boundaries. It is perhaps too much to expect scholars to maintain estates in multiple lands—that is, expertise in more than one discipline—although these four speakers come about as close as anyone to doing so. Nevertheless, creative exchanges across these borderlands—and occasional invitations to take up residence in the core territories of other sovereign disciplines—remain not just useful, but vital for the study of the middle ages.