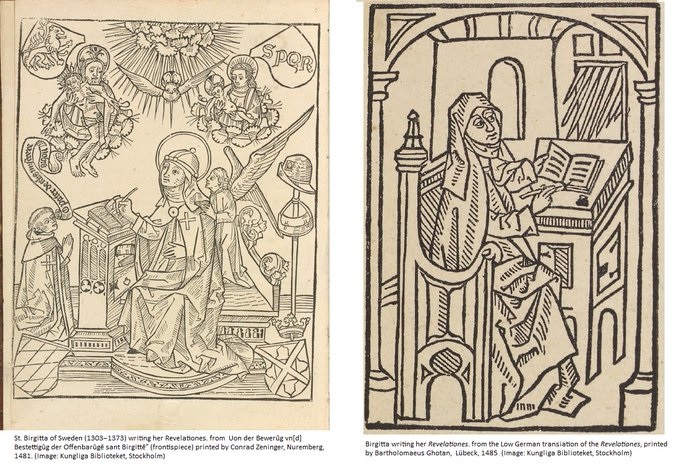 The end of the year and the start of a new one traditionally are opportunities for remembering the time that has passed. For medieval holy women, too, memory mattered. In fact, medieval holy women were experts in remembering the year round, being trained in memoria, the art of memory. In particular, their minds were saturated with sensory memories of the liturgy: the sights, sounds, smells, movements and other sensations of the Divine Office and the Mass, which they shared with their communities, crowded their minds. My MSCA-IF project “Women Making Memories: Liturgy and the Remembering Female Body in Medieval Holy Women’s Texts”, hosted by the Faculty of Medieval and Modern Languages, investigated how texts by medieval women appropriate the memoria taught by the liturgy, and scrutinized the significance of the body, senses, and gender play in these transformations. (This project has received funding from the European Union’s Horizon 2020 research and innovation programme under the Marie Skłodowska-Curie grant agreement No 842443.)

Begun in September 2019 and concluded on 31 December 2022, this project was the first academic project to juxtapose female-authored texts in different north-western European vernaculars. It compared six vernacular (auto)biographies and visionary texts in Middle Dutch, Middle English, and Middle High and Low German. They date from 1300 to 1500 and originate from the European regions now known as the Netherlands (the Diepenveen sister-book, in Middle Dutch), Belgium (Jacomijne Costers’ and Mechtild van Rieviren’s visions, referred to in this study as the Facons revelations), Germany (the Medingen prayerbook), Switzerland (the Sister-book of St Katharinental), and the United Kingdom (Julian of Norwich’ A Revelation of Love, and The Book of Margery Kempe). Medieval culture saw memory predominantly as a generative faculty designed to fashion new discourses and identities, akin to modern imagination. This blogpost therefore summarizes what medieval women want us to remember, linking to the project publications that detail these findings.

In direct response to the pandemic, my project shifted towards examining how medieval women negotiated trauma by means of the liturgy, and we will therefore see that medieval women deployed memory to envision different (post-pandemic) futures.

In this liturgical memoria, placing memories somewhere liturgical was key. Their texts were informed by the physical places in which medieval holy women remembered and the mental “places” (loci, particular locations in their “memory palaces”) with which they remembered. In texts by and for anchorites, individuals living confined to little rooms attached to parish churches, the anchoritic cell provides a powerful interpretative structure for memories of particular sins and physical and mental health complaints associated with anchoritism. In some texts, the cell as physical space and as locus predisposes the anchorite and reader towards penitential practices to both combat these sins and increase these complaints, making this feedback loop reinforce itself more. In A Revelation of Love, however, the cell reframes these memories, transfiguring them into reminders of spiritual homesickness for a space beyond the cell rather than of essential sinfulness contained by the cell.

Painful memories can haunt individuals and communities, as medieval holy women were well aware. The Facons revelations and the Diepenveen sister-book both recount the tragic losses to these religious communities during the Bubonic plague, even weaponizing the painful sensory impressions of this pandemic to exhort the nuns to pray for the continued survival of the community. (A similar strategy animates the St Katharinental’s attempts to remember the souls of the departed more generally.) In chronicling medieval bodily suffering, however, these texts composed by women also bear witness to the corporate trauma of these female communities and tentatively gesture to potential avenues towards integrating these memories into new ones of communal worship. Texts from medieval female religious communities thus anxiously harmonize the shriek of trauma into a single communal voice, singing.

Finally, these women’s memoria point to shared texts and shared embodied experiences weaving shared memories, even when the persons remembering are separated in time and/or space. The project’s nuns from the German-speaking lands and the Low Countries lived a century apart, while the Channel divided Julian of Norwich and Margery Kempe from their Continental peers. Nevertheless, all of these holy women contemplated the mnemonic image of Christ’s suffering body as indelibly engraved upon their minds by the liturgy of Holy Week and spun new memories out of this common memory. Many of them, too, drew on the attitude (intentiones) of joy that pervaded Easter chants or lessons in which Sapientia, a female personification of God’s wisdom, rejoices in dwelling among humanity to celebrate the charity between their fellow religious or between human beings. Memory translates the liturgy into love.

In sum, this project has shown that the medieval art of memory helped (re)build communities and fostered compassion. Ultimately, “Women Making Memories” has not only demonstrated medieval women’s essential contributions to Europe’s literary and spiritual legacy, but also their boundless resilience, which can inspire beyond linguistic, religious, and national boundaries.

This article results from “Women Making Memories: Liturgy and the Remembering Female Body in Medieval Holy Women’s Texts,” Godelinde Gertrude Perk’s MSCA-IF project at the Faculty of Medieval and Modern Languages at the University of Oxford. This project received funding from the European Union’s Horizon 2020 research and innovation programme under the Marie Sklodowska-Curie grant agreement No 842443.