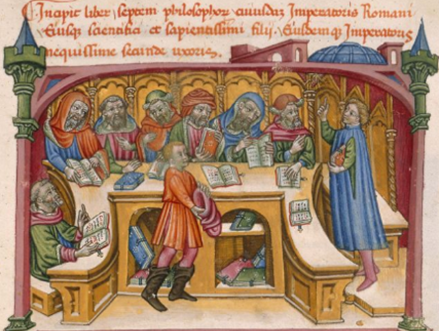 The Seven Sages of Rome (SSR) is a title commonly used for one of the most widely distributed pre-modern collections of stories, which – remarkably – also happens to be barely known today, even among medievalists and early modernists. Several early versions of the SSR exist in Greek (Syntipas), Arabic (Seven Viziers), Hebrew (Mishle Sendebar), Latin (Dolopathos, Historia septem sapientum), Persian (Sindbād-nameh) and Syriac (Sindbād) as well as in the later translations into Armenian, Bulgarian, Czech, Danish, Dutch, German, English, French, Hungarian, Icelandic, Polish, Russian, Scottish, Serbian, Swedish, Spanish, Romanian, Turkish and Yiddish. The multilingual traditions of the SSR, with their many intercultural links, cannot be adequately understood within the current division of research disciplines into distinct medieval and modern linguistic areas. To mend this deficiency, the workshop has invited specialists in affiliated fields to address the problems of surveying the long history of creative adaptations associated with the SSR. The participants will consider the complexities of the philological, literary, and historical analysis of the SSR in many of its attested versions across the pre-modern and early modern periods. The workshop is envisaged as a forum for a robust discussion on possible ways of advancing the current scholarship of the SSR, and as an opportunity to strengthen the inter-institutional collaboration involving specialists based at the universities in Oxford and Berlin, and more broadly.

The workshop will start with a session in the Weston Library on Friday morning where the group will meet other Oxford medievalists at the Coffee Morning, followed by a view of special collections in the library. While this is for speakers only, their is limited capacity to attend the following talks at the Ioannou Centre. If interested, please contact the workshop co-ordinator Josh Hitt.

4.30 pm: Tea and a guided tour of St Edmund Hall with Henrike Lähnemann

Appendix: List of manuscripts and early printed books in the Bodleian Library: