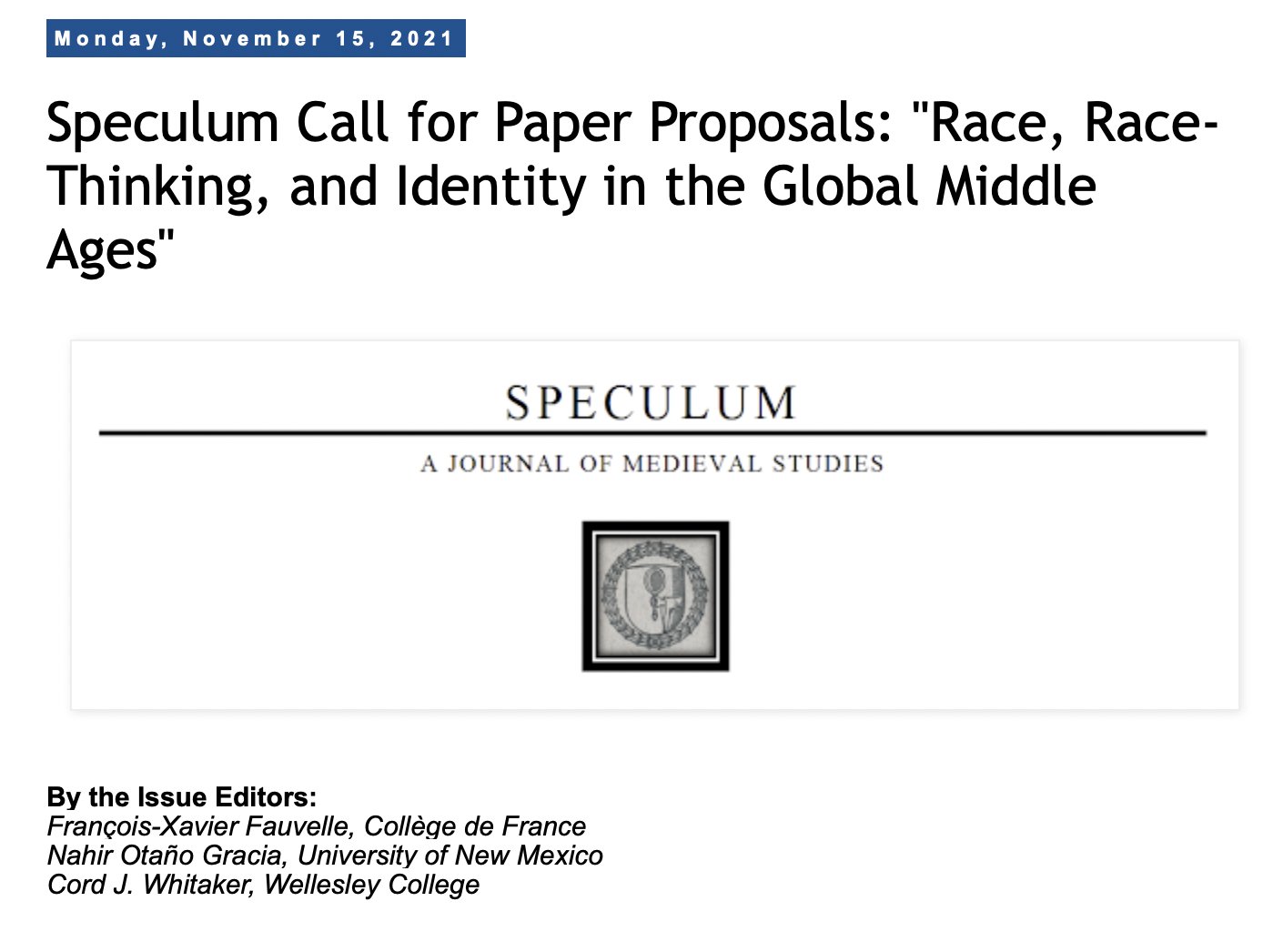 For far too long, scholarly consensus held that race and racism were mainly Enlightenment innovations, datable to no earlier than the seventeenth century. As long ago as the early twentieth century, some scholars pushed race’s origins to the sixteenth or even fifteenth centuries, but these scholars were few and far between. The Middle Ages and, with them, medieval studies were set off as a time and discipline innocent of race and racism. This remained generally true until the advent of critical medieval race studies in the late twentieth and early twenty-first centuries. Now, in 2021, special issues in major journals and no less than six full-length scholarly monographs have treated the imbrications of race with medieval art, literature, religion, and even the periodizing concept of the Middle Ages itself. Many more studies in medieval literature, history, art, religion, and culture have been conceptually informed by race, as have many studies in the modern perceptions and deployments of the Middle Ages. Speculum: A Journal of Medieval Studies calls for proposals for a themed issue, to be published as one of Speculum’s four quarterly issues, to recognize the intellectual value of the study of race to a comprehensive understanding of the Middle Ages.

We invite proposals for full-length essays (8,000-11,000 words) that interrogate race, race-thinking, and identity in the Middle Ages. For example, essays might consider the roles of race-making and racialization in the Islamic world; how race and identity, together with religion, was negotiated and navigated in border regions such as al-Andalus, Sicily or the Levant (between Latin Christendom and Islam), the Sahara and the Sahel region (between the Islamic world and Subsaharan Africa); how the dynamics of race-thinking informed relations between Latin and Greek Christendom and Islam or the Mongol Empire, or between the Muslim/Islamicate world and Christian, Jewish, Hinduist, and traditional-religious societies within it or beyond its reaches; how race intersected with the dynamics of trade and connectivity, religious affiliation and conversion, slavery and emancipation, peace and war. Essays may also take on the roles of race, race-thinking, and identity in the geography and periodization of the Middle Ages: Are historical moments that are quintessential to the history of race also relevant to medieval-and-modern periodizations? Essays may also consider how and why race, race-thinking, and identity have shaped modern concepts, uses, and scholarship of the Middle Ages.

The editors are open to essays that interrogate race, race-thinking, and identity in the Middle Ages by asking these and other deeply probing questions. Additionally, we are especially interested in essays that consider the globality of the medieval world: those that examine the networked interrelations and interdependences of Africa, Asia, the Americas, and Europe. In addition to scholarship in history and literature, we invite proposals using the tools and methods of anthropology, archaeology, art history, book history, historical linguistics, religious studies, sociology, and other fields germane to the studies of race, identity, and the Middle Ages.

The themed issue on race, race-thinking, and identity and the articles selected for it will be in keeping with Speculum’s purview as stated in the Guidelines for Submission: “preference is ordinarily given to articles of interest to readers in more than one discipline and beyond the specialty in question. Articles taking a more global approach to medieval studies are also welcomed, particularly when the topic engages with one or more of the core areas of study outlined above. Submissions with appeal to a broad cross-section of medievalists are highly encouraged.”

Proposals should be no more than 500 words in length and should be submitted by email to cord.whitaker@wellesley.edu with SPECULUM PROPOSAL in the subject line by 31 January 2022. The authors of selected proposals will be notified by 28 February 2022. Completed essays will be expected by 1 December 2022.