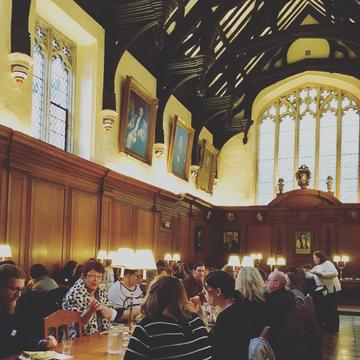 The Gender and Medieval Studies Conference is an annual peripatetic event that has been running since at least the late 1980s and traditionally takes place in early January. It welcomes scholars working across the whole Middle Ages and from any discipline. This small but well-respected conference is a key part of the calendar for medievalists and gender scholars alike. The steering committee of GMS asked me if I could host the conference at Oxford, and I was pleased to accept after drafting in Gareth Evans (Faculty of English) as co-organiser, with able assistance from Ayoush Lazikani and Anna Senkiw. Sixty-five delegates, ranging from masters students to tenured professors, from all around the world, eventually made their way to Oxford this January for three days of stimulating discussion on gender and identity in the medieval world.

This year’s theme was Gender, Identity, Iconography. Constructed at and across the intersections of race, disability, sexual orientation, religion, national identity, age, social class, and economic status, gendered medieval identities are multiple, mobile, and multivalent. Iconography – both religious and secular – plays a key role in the representation of such multifaceted identities. Across the range of medieval media, visual symbolism is used actively to produce, inscribe, and express the gendered identities of both individuals and groups. The aim of this conference was to provoke conversations across disciplines and time periods to understand the ways in which gender identity could be understood through image and iconography. We were also committed to providing a conference for everyone: accessible to all academics at any stage of their career in terms of price point, disability access, and in providing a safe and welcoming environment.

Corpus Christi College was an excellent venue, as its auditorium is very accessible and the conference office was very helpful in accommodating all dietary needs. Delegates were pleased to be able to make use also of Corpus’s beautiful historic spaces, such as the dining hall. As early career researchers ourselves, Gareth and I were keen to ensure the conference was affordable, and with support from Oxford Medieval Studies, the Leverhulme Trust, the Society for Medieval Feminist Scholarship and Castle Hill Bookshop we were able to provide a comprehensive programme while keeping the registration fee down.

The Call for Papers attracted a high number of good quality abstracts. We eventually selected thirty-two speakers out of almost ninety abstracts submitted, organised across ten panels over three days. Speakers talked on topics ranging from Amazon queens to public nudity to imperial eunuchs, in panels organised by theme, allowing for some fascinating cross period and interdisciplinary discussion.

We also secured three plenary speakers – Prof Annie Sutherland (University of Oxford), Prof Patricia Skinner (University of Swansea), and in a new initiative, an Early Career Plenary Speaker, Dr Alicia Spencer-Hall (Queen Mary, University of London). GMS has always been committed to supporting early career scholars, and offering a plenary spot to an outstanding early career researcher was a way to further this aim. Feedback on this initiative at the event and on twitter (we extensively covered the event at #gms2018) was extremely positive, and we would like to encourage other conference organisers to consider following our example by establishing an ECR plenary spot.

On top of all these exciting papers, we were able to commission Dr Daisy Black (University of Wolverhampton) to perform Unruly Woman, a riotous, funny and touching one woman interpretation of medieval fabliaux and romances, and with Dr Charlotte Berry hosted a workshop with medieval seals at Magdalen College Library, allowing delegates to get up close and personal with some fascinating gendered iconography in their impressive collection of seals.

The conference wrapped up with a roundtable on teaching medieval gender, allowing for a reflective conversation about how we communicate our research to our students in empathetic, responsible ways (one of our contributors, Dr Laura Varnam, has a great blog post about that session here). It was a fitting end to a conference that, as one attendee put it, left them feeling “empowered, inspired, and happily cocooned within a supportive and fierce community” and another described as “amazing, inspirational and motivational”.