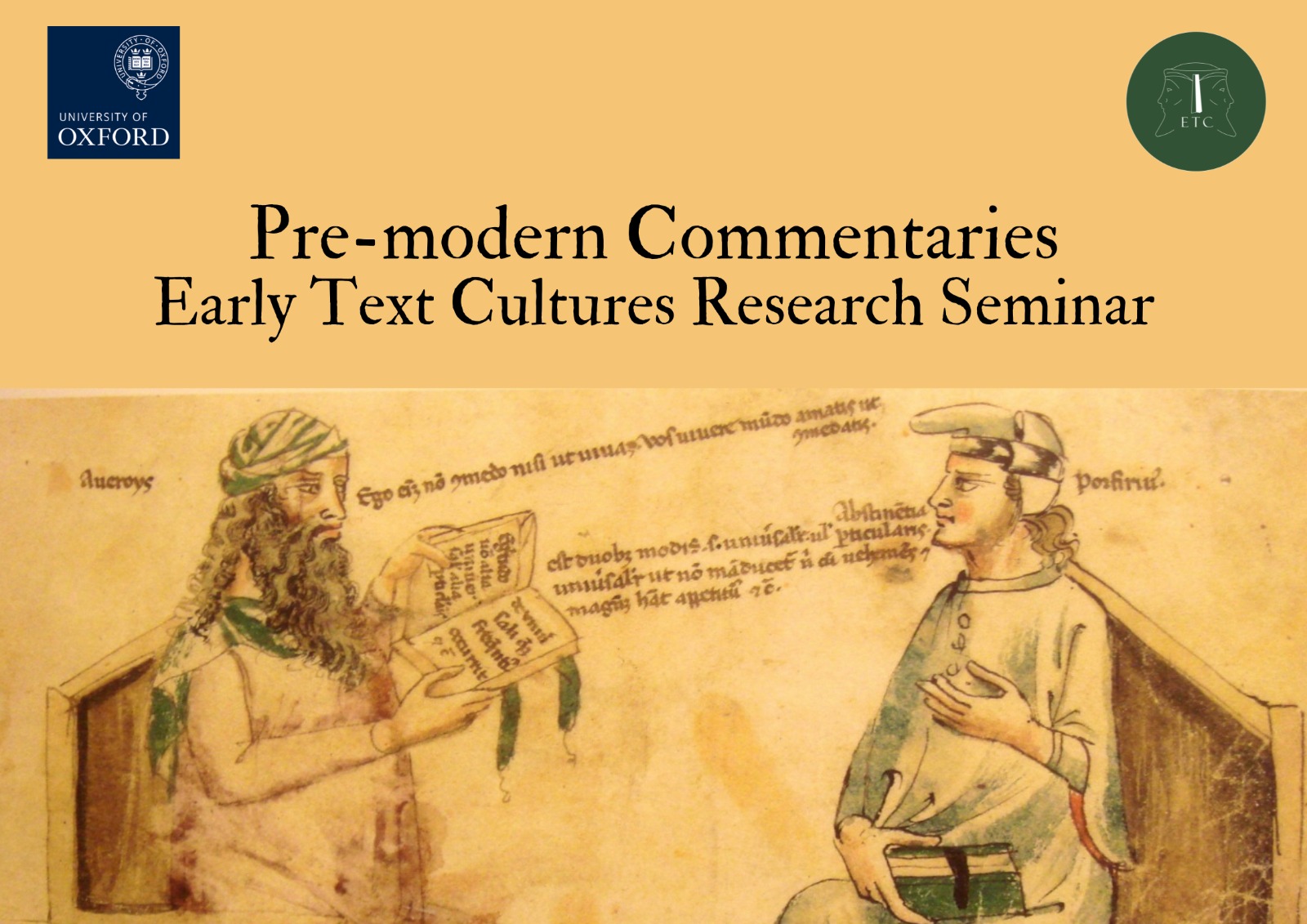 The Early Text Cultures Research seminar for Michaelmas Term will be on the theme of Pre-modern Commentaries. We hope that the seminar will enable us to denaturalise default definitions of ‘commentary’ and to bring out key similarities and differences across a broad spectrum of pre-modern exegetical and interpretive practices. Speakers will discuss commentary features in Old Norse, Medieval Chinese, Sanskrit and Latin contexts. After a ca. 20-min presentation, there will be ample opportunity for cross-disciplinary discussion.

The seminar will be held at Corpus Christi College in even weeks, on Wednesdays at 2–3pm.

I’ll be speaking about Icelandic historian and politician Snorri Sturluson (1178/9-1241) and the impact the texts attributed to him have had on studying Old Norse/Icelandic literary culture. I’ll focus primarily on Snorra Edda (sometimes called the Prose Edda), and I will also briefly touch on Heimskringla, Snorri’s book of sagas about the Norwegian kings. Snorra Edda was originally intended as a manual of poetics written to give his contemporary readers background knowledge of Norse mythology enough to understand the intricacies of skaldic poetry. Snorri often uses much older mythological poems as examples, and his references to these poems are often the only surviving place where these poems are preserved. Snorri’s Edda is not only a work that has become important to Old Norse literary scholars, but also to scholars of Mythology and Religion, for Snorra Edda is often the only place where several mythological stories of the gods like Þórr and Óðinn are recorded. However, Snorri was both a Christian and a politician and often took creative license with his source material. Snorri’s motivations aside, there is no denying that Snorra Edda has profoundly impacted the modern view of Old Norse mythology.

In this seminar I will explore exegesis of the Zhuangzi 莊子 (4th century BCE), a classic of ancient Chinese literature associated with Daoism. Comprised of narratives and dialogues, this text is often humorous and subversive and has inspired a range of responses throughout Chinese history. The presentation will focus on the Song dynasty commentary written by Lin Xiyi 林希逸 (1193–1271), exploring the importance of context and process in his work. Lin was influenced by Neo-Confucian thought, a dominant feature of the times, and also by ongoing debates as to whether literary writings were valuable or harmful to ethical cultivation. Of particular interest will be two questions: (1) how is the commentary arising out of Lin Xiyi’s interaction with previous thinkers as well as his contemporaries, and (2) how is his literary analysis of the Zhuangzi featuring within this matrix?

The Process of Commentary: Interpreting a 100,000-verse Epic

This talk will focus on the Sanskrit epic Mahabharata (1st c. BCE) and its commentaries in the late medieval and early modern period (13th-17th c.). I will address the following questions: In what ways do intertextual relations inform the development of written commentary? How can written commentaries ‘import’ meanings into a text from other genres, and how can they also ‘export’ those interpretations into other genres?

My research is primarily concerned with the commentary on Vergil’s Eclogues and Georgics known as Bern scholia and with the augmented version of Servius’ commentary on the whole of Vergil known, after its first editor Pierre Daniel, as Seruius Danielis or DS scholia. Both commentaries were probably assembled in seventh-century (Insular?) scriptoria by anonymous compilers who resorted to pre-existing commentaries, but almost all their extant witnesses date back to the Carolingian period. I am currently aiming to analyse the characters of the different versions of the Bern and DS scholia transmitted by each witness and to establish their genealogical relationships. On these grounds, I hope to shed some new light on the Carolingian engagement with the two commentaries.